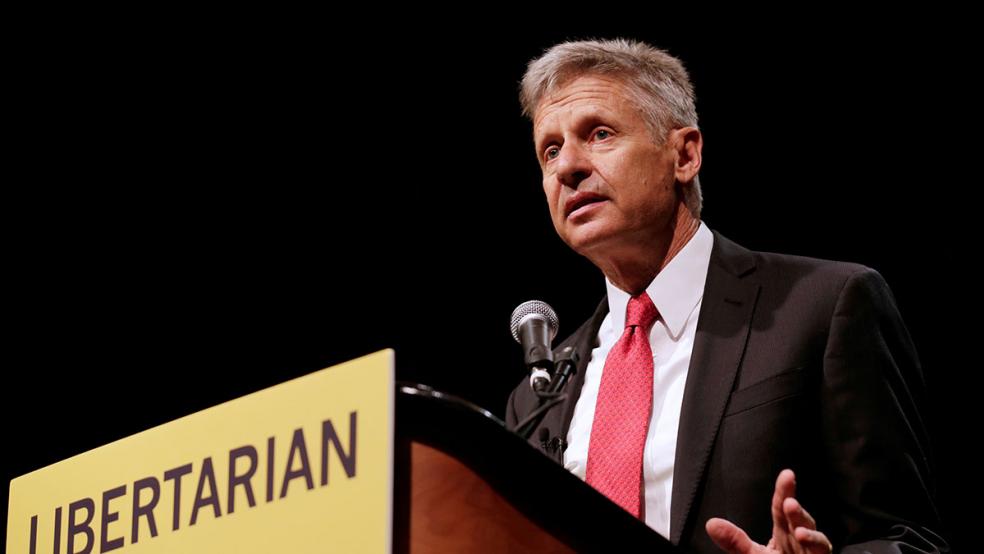 Gary Johnson, the Libertarian candidate for president, may be on track to win more votes than any third-party candidate in 20 years, if current polling holds up.

Who are his supporters?

Johnson, a former Republican governor of New Mexico, is relying heavily on the backing of young people and independent voters disillusioned with the two major parties’ nominees.

More than 70 percent of his backers are younger than 50, and over three-fifths are political independents, according to a mid-August poll by the Pew Research Center.

Overall, Johnson, who will be on the ballot in all 50 states, has the backing of 10 percent of registered voters, the Pew poll found.

Johnson’s coalition is relatively diverse, particularly compared with that of Donald Trump, the Republican presidential nominee.

Thirteen percent of Johnson’s backers are black or Latino, compared with just 6 percent for Trump.

And while just 42 percent of Trump’s supporters are women, the Pew center found that Johnson’s are evenly divided — 51 percent women, 49 percent men.

Republican strategists have long said that their party must do more to appeal to voters who are younger, nonwhite and women. Trump trails Hillary Clinton, the Democratic presidential nominee, by almost 20 points among women, and by far more among minority voters, Pew found.

“Something is happening where the coalition is no longer able to appeal beyond its disparate and shrinking constituencies,” said Michael Madrid, a principal at GrassrootsLab, a Republican consulting firm. “That’s the main problem facing Republicans.”

As Trump departs from Republican orthodoxy on issues including free trade and entitlement reform, he remains burdened by the thing that may be most unpopular about the party: its own brand. More than 6 in 10 Americans view the Republican Party unfavorably, according to a New York Times/CBS News poll from July.

Originally an entrepreneur, Johnson has cast himself as an alternative to Trump by focusing on reducing the size of the government while embracing a hands-off approach to social issues.

He advocates abolishing the income tax, removing regulations on internet companies and moving aggressively to balance the federal budget.

But much of Johnson’s message has focused on social policy. His support for abortion rights and legalized marijuana appeals to many young people, while putting him out of step with his former party.

“When you get past the rhetoric and past the primary politics that Republicans and Democrats each have to play, the real majority of Americans are essentially fiscally responsible and socially inclusive,” said Joe Hunter, a spokesman for Johnson.

“Right now, neither of the two major parties — particularly the Republican Party — is representing that view,” Hunter said.

Johnson has strongly opposed Trump’s proposal for a wall along the border with Mexico, saying instead that the government should make it easier for immigrants to enter the United States legally.

The ascent of Johnson — who garnered less than 1 percent of the vote as the Libertarian candidate in 2012 — owes partly to dissatisfaction with Trump and Clinton, who both receive negative ratings from most voters. It also reflects the fact that a plurality of Americans today identify as independents.

A Washington Post/ABC News poll from August put Johnson’s overall support at 8 percent, but showed him earning 14 percent among independents. He is drawing support about equally from voters who would otherwise lean toward Trump or Clinton.

Johnson is pushing to reach 15 percent in the major national polls, which would qualify him to participate in nationally televised presidential debates.

The business mogul Ross Perot ran as an independent presidential candidate in 1992, earning 19 percent of the popular vote with a platform of socially moderate and fiscally conservative policies not unlike those of Johnson. He, too, drew most of his support from younger voters. Perot ran again in 1996 and got 8 percent of the vote.

Johnson is currently nowhere near where Perot was in 1992, when he briefly led both Bill Clinton and George Bush in the polls.

And there are distinct vulnerabilities in Johnson’s appeal.

He leans heavily on the Western states, drawing about a third of his support from there, according to two recent Washington Post/ABC News polls.

And the Pew survey shows Johnson polling at just 4 percent among voters 65 and older. He is doing equally poorly among those who describe themselves as very conservative.

For now, older voters and the conservative base remain crucial to the Republican Party. Despite its troubles in presidential elections over the past 25 years, the party controls both houses of Congress and most state legislatures.

But Trump faces an uphill battle, and if he loses, the Republicans will once again have to rethink how they pick their presidential nominee and how to widen their appeal to a changing electorate.

“This is likely to be the sixth election out of the last seven when Republicans lose the popular vote,” said Richard Born, a political scientist at Vassar College who studies political polarization. “They’re going to have to moderate, and immigration rights will be one place they have to moderate.”

If Trump loses in November, he added, the Republican Party’s 2020 nominee could be “somewhere in between a Gary Johnson and a Mitt Romney.”

Who Favors Gary Johnson, the Libertarian Candidate for President? added by Tribune on September 5, 2016
View all posts by Tribune →