Republican delegates are converging on the lakeside city of Cleveland for the Republican National Convention. Their task is to nominate the party’s presidential candidate for the election in November. There is a single contender: Donald Trump, the property tycoon, reality TV star and — after a successful primary campaign that upended American politics this spring — the man poised to take the nomination.

Since late May, Trump has controlled a majority of the 2,472 delegate votes. If he is nominated as expected by the end of this week’s convention — four days of speeches, political events and likely street protests — he will emerge as the Republican Party’s first presidential candidate since 1940 whose principal qualification is his experience as a corporate executive.

— Is the outcome in doubt?

Not really, although there could be complications. In a normal year, conventions are pageants of carefully choreographed political theater in which the party seeks to heal the wounds of the primary election, unite behind a candidate and galvanize its base for the larger battle of the presidential election.

This is not a normal year. Late last week, Trump’s opponents in the so-called Never Trump movement tried to amend party rules to allow delegates already pledged to a candidate according to the primary results to vote according to their consciences. The last-ditch effort failed — it could have effectively disenfranchised the 14 million people who voted for Trump — but was seen as a sign of the divisions that his unconventional candidacy has driven down the center of the Republican Party.

The Republican establishment is uncomfortable with Trump’s candidacy, accusing him of disregarding Republican orthodoxy and treating the party as little more than vehicle for his personal ambitions. Several leading Republicans — including former President George W. Bush and his father, George Bush, also a former president — are not coming to Cleveland. Other party members have openly snubbed Trump, announcing that they have other plans this week, such as going fly-fishing, or a pressing need to “mow the lawn.”

Trump has divided big business, too. Some tech companies that have supported Republican conventions in previous years, like Apple, have pulled out of this year’s event.

Trump has struggled to attract many A-list celebrities to speak at the event, and the provisional lineup includes an eclectic variety of speakers including his wife, Melania; his four adult children; a female astronaut; and Pam Bondi, the Florida attorney general. One speaker, the professional golfer Natalie Gulbis, met Trump at a tournament at one of his golf courses and starred on his reality TV show “The Apprentice.” Other speakers include Willie Robertson of the television show “Duck Dynasty” and a number of actors from daytime soap operas, one of whom is a former underwear model.

Survivors of the 2012 attack on the U.S. consulate in Benghazi, Libya, are scheduled to speak, as are several of Trump’s vanquished rivals from the primary contest, like Sen. Ted Cruz of Texas and Dr. Ben Carson.

Although many senior Republicans are skipping the conference, it will be hosted by Paul Ryan of Wisconsin, the speaker of the House of Representatives and the highest-ranking elected Republican. Ryan has openly clashed with Trump on his most contentious proposals, but has agreed to row behind the Trump candidacy for the sake of party unity.

A key last-minute addition to the speaking order is Gov. Mike Pence of Indiana, whom Trump announced as his candidate for vice president on Friday. The chaotic manner of Pence’s appointment, with Trump wavering between his options until the last moment, typified his on-the-fly management style, which has so unnerved many Republican leaders. Yet the choice of Pence, a hard-line social conservative, could expand Trump’s support among the party’s Christian base.

Most important, Trump has the support of 1,542 pledged and unpledged delegates — more than the 1,237 required to clinch the nomination. That does not guarantee him an easy ride, though — organizers worry that refuseniks could still find a way to drag out his nomination and cast the proceedings into chaos.

— What about the streets outside?

The anticipated arrival of thousands of demonstrators in Cleveland, following rowdy scenes at Trump rallies in Chicago and California this year, has stoked fears of violent clashes outside Quicken Loans Arena, where the convention will be held. At least 10,000 people from a wide spectrum of groups have expressed their intention to march, including Catholic nuns, white skinheads and Westboro Baptist Church, a church from Kansas that campaigns against gay rights. Recent shootings of police officers in Texas and Louisiana have intensified worries of bloodshed.

The authorities in Cleveland have drafted an extra 2,500 police officers for the convention, extended the courts’ daily operating hours to 20 and cleared 1,000 beds at local jails in case of mass arrests. A range of items, including gas masks and milk bottles, have been banned from the area around the arena.

Real guns, though, are allowed: Ohio is one of several states to allow licensed gun owners to carry their weapons openly. (However, guns will not be permitted inside the convention hall, which will be secured by the Secret Service, or a small perimeter area around it.) Some news 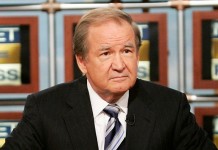 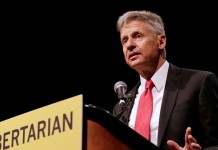 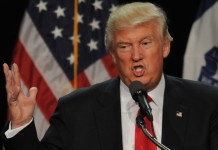