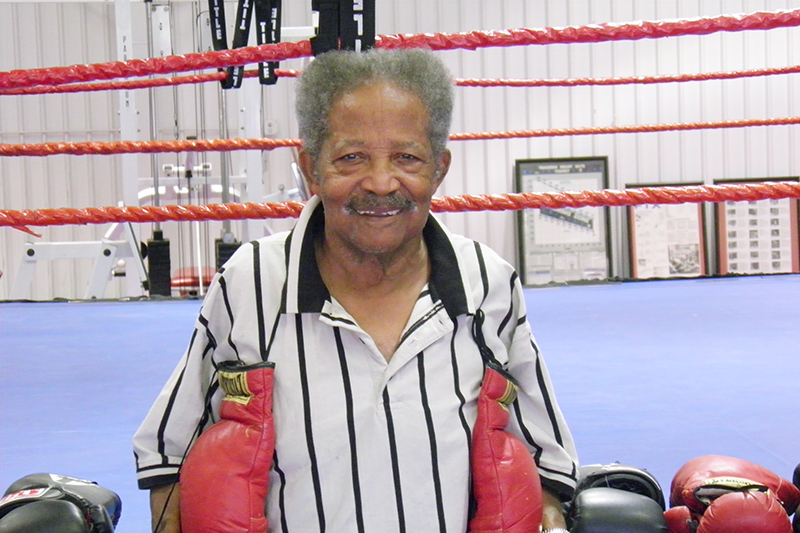 The Olympic spirit still burns inside Phil Baldwin. Muskegon has produced more than its fair share of athletes who have gone on to great success at the state and national level – Bennie Oosterbaan, Earl Morrall, Ed Burton and Justin Abdelkader are just a few that come to mind immediately.

But off of that prestigious list, only one athlete in the history of Muskegon County has ever competed in the Summer Olympic Games: Phil Baldwin.
Which is why every four years, with the Games of the XXXI Olympiad in Rio de Janeiro, Brazil, less than one year away, it’s fitting to remember the quiet, unassuming Baldwin – a boxing quarterfinalist at the 1960 Summer Olympics in Rome who has lived in the same Muskegon Heights neighborhood for the past 71 years of his life.

“I was just a young black kid from the ghetto and there I was in the Olympic Games in Rome,“ recalled Baldwin, 74, who was born in Montgomery, Ala., and migrated north in the early 1940s as his father sought work in the northern factories.
“Yes, boxing changed my life.”

Baldwin has an Olympic story worth of a Bob Costas vignette – starting as a small town kid from a no-name gym making the Olympic team, then getting seriously ill just before the Games, rallying to make the quarterfinals, getting robbed by a biased judge and being supported through all of those ups and downs by a close friend who also happens to be the most famous athlete in world history.
“I guess it is quite a tale,” Baldwin said. “But at the time, it was just the most fun a kid could ever have.”

Baldwin idolized his older brothers, Leroy and Danny, while growing up in Muskegon Heights.
So when they were heading to the musty old Catholic Youth Organization boxing gym above a tavern on the corner of Sanford Street and Broadway Avenue, their scrawny grade-school brother usually tagged along. It seemed impossible that an Olympian could ever come out of such a meager facility, boasting only a ring and a punching bag.
But what the CYO lacked in elegance, it more than made up for it with wily teachers and sparring partners – notably Pete Petroskey, Mel Burns and Kenny Lane.
“Phil was only in high school and he was still my best sparring partner,” said Lane, who twice fought for the world lightweight title, in a 1992 interview. “We had some terrific wars. We stressed defense, and we would go four or five rounds and never even touch each other.”

The young Baldwin learned valuable lessons from his fellow southpaw Lane, which he used to win the 1960 Michigan Golden Gloves title at 147 pounds. An 18-year-old senior at Muskegon Heights at the time, Baldwin then won the National AAU 147-pound championship in April – an accomplishment that only Oscar German can match among local boxers.

In May, he traveled to San Francisco and knocked off now-legendary referee Mills Lane in the semifinals and eventually won a spot on the United States Olympic Team – an honor that he alone can boast among Port City pugilists.

“What Phil did in 1960 was really unbelievable,” said local boxing trainer Jack Crowell, Baldwin’s longtime friend. “It’s been 55 years since then and we haven’t had another national boxing champion. That’s a big deal.”

After a month of intensive training in New Jersey, the U.S. Olympic boxing team took off for Rome, with one of its members missing: Phil Baldwin.
Baldwin was in a New York City hospital bed with pneumonia. His Olympic dream was looking like more of a nightmare.

“I knew I was going to miss the opening ceremonies, but I had about a week before the actual fights started,” said Baldwin, who received steady treatments of penicillin and finally got the strength to fly over and join his teammates one week later.

There to greet him at the airport in Rome was his best friend on the team, a loudmouth but charismatic kid from Louisville, Ky., named Cassius Clay, who later changed his name to Muhammed Ali.

The two became friends on the regional Golden Gloves circuit in Chicago and really bonded in Rome, where they were two of the younger fighters on the U.S. boxing team.
“Most of the other guys were older and they really didn’t want to talk to him,” Baldwin said of Ali, who has come to Muskegon Heights on several occasions to visit his friend. “He was always funny and friendly to me.”

Despite fighting at what he estimates as “70 percent,” Baldwin won his first two bouts to set up a showdown with Britain’s Jim Lloyd in the 147-pound quarterfinals.
Baldwin appeared to win the first round against Lloyd with several solid combination punches at the end of the round. In the second round, Baldwin took control and almost floored Lloyd with right hooks. In the final round, the still-recovering Baldwin tired and was hit by several solid blows.

Baldwin and his teammates felt he had won the bout “by a mile” and would be in the final four in his division, but the judges gave the decision to Lloyd – a choice which was booed loudly by the Italian crowd, which was not known for being sympathetic to U.S. athletes.
“There wasn’t really anything we could do about it, but about three or four of us got robbed,” Baldwin recalled. “The crowd knew it.”

Cassius Clay became Muhammad Ali and went on to worldwide fame and fortune. Phil Baldwin remained Phil Baldwin and came home to Muskegon Heights.
“We were completely opposite personalities, but opposites attract,” said Baldwin, who has seven children and lives with his wife of 48 years, Joanne.

Baldwin, after briefly being on the world stage in 1960, won a second National AAU title and won one professional fight in 1962 before giving up the sport to come home to work and raise his family. Baldwin settled back into his more comfortable role as an average guy in Muskegon Heights, working for years as a self-employed contractor and electrician.
He never boasts about his boxing exploits. However, others do it for him.
“Phil is an extremely dignified person,” said Matt Kolkema, a local boxing promoter and coach who ran the Muskegon Recreation Center boxing gym at Smith-Ryerson Park in Muskegon. “I’ve used Phil as an example to a lot of our kids.”

Baldwin has spent most of the past 55 years behind the scenes, briefly coming back into the spotlight in 1993 when he was inducted into the Muskegon Area Sports Hall of Fame, on several occasions when he hosted visits from Ali in Muskegon Heights and at a special boxing show in his honor in 2002.

That tribute was organized to help Baldwin in the most recent, and toughest, fight of his life. Baldwin has been battling kidney disease for the past 15 years, with five years of dialysis, followed by a kidney transplant in 2005.
The disease has slowed him down, in a way mirroring Ali’s very public battle with Parkinson’s Disease, but has not diminished his positive spirit.
To this day, Phil Baldwin remains a great fighter – and a true champion in the city of Muskegon Heights.

What: Baldwin remains the only Muskegon County athlete to ever compete in the Summer Olympic Games, reaching the 147-pound quarterfinals at the 1960 Olympic Games in Rome.

When in Rome: Baldwin won his first two bouts, before losing a controversial decision to Englishman Jim Lloyd in the quarterfinals, a decision that was booed for 15 minutes by the Italian crowd.

Friendship: While he left Rome without a medal, it was there that he cemented his lifelong friendship with Muhammad Ali, then known as Cassius Clay.

Notable: Baldwin was born in Montgomery, Ala., but has lived in the same three-block area of Muskegon Heights for the past 71 years.

Quotable: “I was just a young black kid from the ghetto and there I was in the Olympic Games in Rome. Yes, boxing changed my life” – Phil Baldwin.

Phil Baldwin: The Olympian from Muskegon Heights added by admin on June 30, 2016
View all posts by admin →