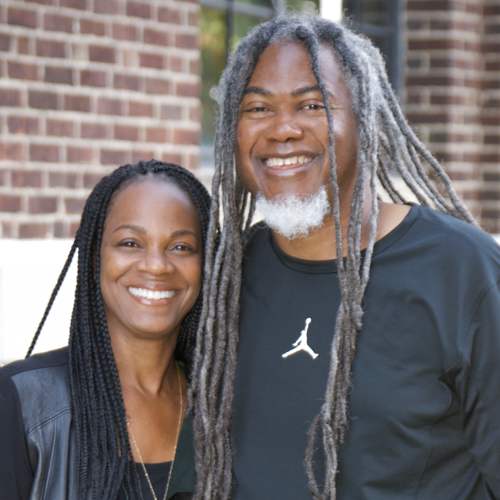 By Tom Kendra
The first thing you notice about Jimmy Smith is his imposing presence, standing all of 6-foot-4, with an athletic frame he carries confidently, dreadlocks running down from his head.

But it doesn’t take long until you realize his magic has nothing to do with his size or physical intimidation. In fact, it’s just the opposite.

Jimmy gives off a relaxing vibe, which enables him to truly connect with everybody – young or old, male or female, black or white – a gift which has allowed the 1980 graduate of Mona Shores High School to rise all the way to the top of the advertising world.
“No worries, we have time to chat, let’s do it,” Jimmy said, dressed casually in black sweat pants and a Nike long-sleeved T-shirt, while crammed into the small green room just moments before heading out to deliver the keynote address in front of hundreds of executives trying to better their organizations. “Whatever you need.”

It doesn’t matter if it’s 1-on-1 with a small-town reporter, in front of a room of 200 suits or behind a camera creating a message that will be viewed by millions, Smith is able to employ his innate people skills and his God-given instincts to make a connection.
He started to use those skills in the advertising world when his dream of playing in the NBA crashed and burned (he was cut three times from the Michigan State University basketball team), leading him on an odyssey during which he created two advertisements that were ranked earlier this year by Adweek Magazine among the Top 15 campaigns by African-Americans that changed the advertising landscape, influencing both contemporaries and generations to come.

He has worked with the likes of Nike and Gatorade and Hilton and has moved from Chicago to Portland to New York and finally Los Angeles – where, in 2011, he founded Amusement Park Entertainment, where he is the Chief Creative Officer.
“Now I’m my own joint,” said Jimmy, now 56, in his trademark, laid-back style.
Jimmy returned to West Michigan on Oct. 10, as the keynote speaker at a national conference for nonprofit organizations held in downtown Grand Rapids and hosted by Grand-Haven based company Do More Good, which was founded by Jimmy’s high school classmate, Bill McKendry.

The irony was, for all of the speaking he has done directly around the world and indirectly through his campaigns, it was the first time Jimmy addressed a group back home in West Michigan, where he grew up.
Hoop dreams

Jimmy was going to be a professional basketball player and in his teenage mind, his future was set.
He was a very good basketball player at Mona Shores, but his mother told him he better come up with some kind of alternative plan.
“I was watching ‘Bewitched’ and Darrin was an advertising executive,” Jimmy said with a laugh, thinking back to his younger self. “I thought to myself, ‘That dude has a nice house, a good-looking wife and never seems to be working very hard. That’s when I decided advertising would be by Plan B.”

It turned out Mother Knows Best. When he got cut by MSU for the third time, he immersed himself in advertising and vowed to become the next Darrin.

That was also about the time that he met his future wife at a campus party.
“I met her and my friend asked me what I thought of her,” Jimmy recalled. “I said: ‘That girl is smokin.’ From that day on, she’s been known as Smoke.”

Jimmy and Smoke soon left East Lansing and started their long climb to the top of the advertising world. They proved to be a perfect fit, with Smoke being a numbers and detail person, allowing Jimmy to let his creative energy run. Along the way, the couple had two sons – Sequel (28) and Jarrel (27) – who both also work at Amusement Park.
As with any success story, there were highs and lows along the way (the couple were broke and had to sell their cars around the turn of the century), but he always considered himself blessed.

“I don’t look at what I do as work,” Jimmy explained. “The creative brain can take anything and turn it into something creative.”

And from his early days out West, he had the unique ability to make his commercials work across the racial and socio-economic landscape of America.
To understand how he was able to do that, perhaps as well as any African-American in the history of advertising, you have to look at his upbringing in Muskegon.

When he was still in elementary school, his family moved from predominantly black Muskegon Heights into almost totally white Roosevelt Park.
Jimmy said his father, who worked in various factories and later owned an Arby’s franchise in Muskegon, was determined to be a non-violent “blockbuster,” encouraged by the words of Martin Luther King Jr. to move his family into a predominantly white area for access to better homes, stores and schools.

It was a move that was met with blatant racism, complete with rocks thrown at their home, burning crosses planted in their yard and Jimmy getting called the “N-word” at recess.
“It was pretty bad at first, but let me tell you something,” Jimmy said. “My teachers and principal at school (Campbell Elementary) were awesome. Principal Howell sat me down one day and said: ‘Jimmy, you can’t get in a fight with every person that make you mad. There are other ways to shut people up.’ That made sense to me! I think I learned a lot of my communication skills as a result of that, and things got better.”

He looks at those first years in Roosevelt Park as a time where he built up stress wood, which refers to the stronger root wood which trees build up from the stress of winds blowing it back and forth.

His applied some of those lessons in his critically-acclaimed “What is G” campaign for Gatorade in 2009. Jimmy has called that campaign the product of “the most racially diverse group of creatives in advertising history.”

The 1-minute long ad shows a litany of primarily black athletes associated with a different g-word – Derek Jeter (gifted), Dwayne Wade (golden), Muhammad Ali (GOAT, for Greatest of all Time), followed by genuine, glorious and finally just the G. The campaign was credited with making Gatorade, which had been steadily losing market share, relevant again with a whole new generation.

“He lived in both of those worlds, and he continues to bring them together through his work,” McKendry told the crowd during his introduction at the Oct. 10 conference.

Jimmy said that out of that early racism and the loss of his professional basketball dream, came clarity. It’s no wonder that many of his ads are noted for their simplicity.
A great example is the Nike Freestyle campaign in 2001, when he was working for the Wieden + Kennedy Agency.

The 2 minute, 30 second commercial – driven by the pounding of basketballs on the ground and the squeaks of basketball shoes on a newly waxed floor – features no dialogue or words until a single Nike swoosh appears at the end as a basketball bounces away. That ad was credited for helping establish the Nike swoosh as one of the most recognizable logos in the world.

In more recent years, Jimmy has become known for his courage and his caring.
He told the conference in Grand Rapids about one of the advertising pitches he made early in his career, which he was quite proud of, but earned him a scolding.

“That particular individual told me: ‘We are not here to uplift the spirits of the community. We are here to make money,’” Jimmy recalled. “I couldn’t stomach that. I thought to myself: ‘There is no way I am going to stand in front of God and say something like that.’ I vowed from that point forward that I was going to try and do good from inside of corporate America.”

He is not afraid to push limits, which he did in a 30-second spot called “Self Genocide,” featuring a burning cross to shock African-Americans into quitting smoking. He has also done work for a variety of nonprofit organizations, including Hope Builders and Children’s Hospital of Orange County.
That attitude also explains why he refused to take payment for his homecoming speech at the Do More Good conference.

“It feels good to come back here and do this,” Jimmy said. “Kids need to know that the biggest superstars usually come from the smallest places, so don’t use your town as an excuse.

“I don’t have anything special, but I believe that I have something special. That belief has got me to where I am today.”

FAXBOX
Do More Good
Do More Good was founded as a 501(c)(3) in January of this year and, as the name suggests, it seeks to help nonprofit organizations brand and market themselves so that they can do more good. The Grand Haven-based group’s first national conference on Oct. 10 in downtown Grand Rapids drew representatives from roughly 150 different nonprofit organizations. For more information, go to the group’s web site at www.domoregood.org

Mona Shores grad rises to the top of advertising world added by admin on November 4, 2019
View all posts by admin →