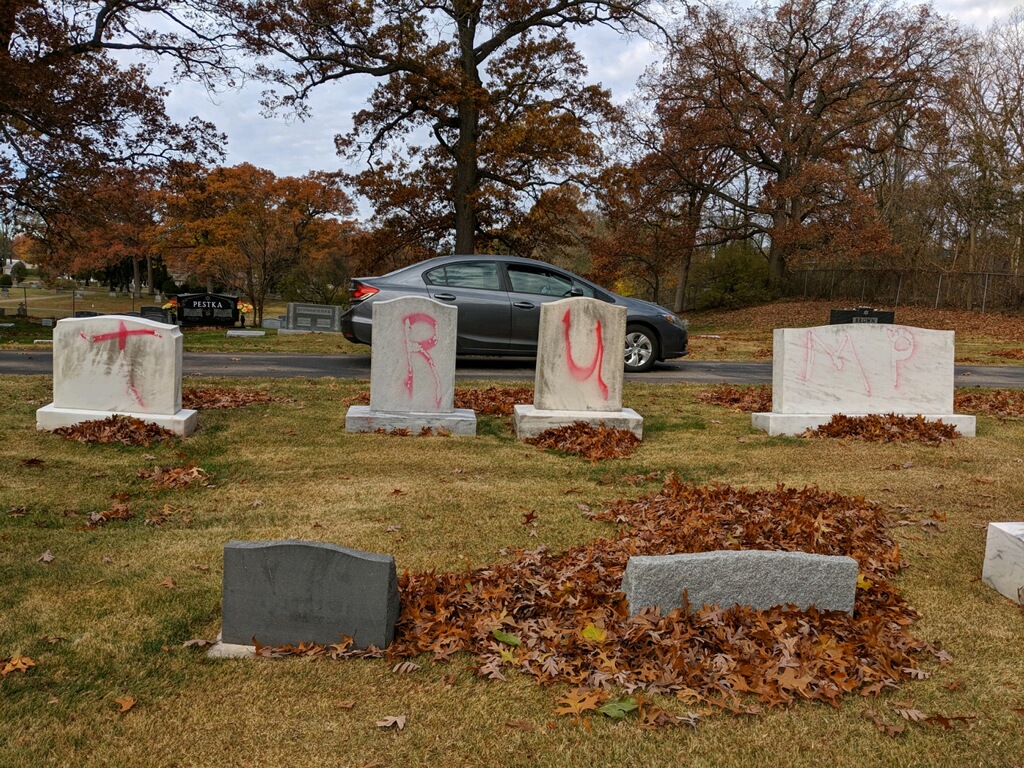 (RNS) — Gayle Kirshenbaum planned to spend Election Day calling potential voters in Michigan and Pennsylvania and urging them to vote.

Instead she woke up to a disturbing text from her brother telling her the Ahavas Israel Cemetery where her grandparents and great-grandparents are buried had been desecrated by vandals who spray-painted T-R-U-M-P and MAGA (President Donald Trump’s campaign slogan, “Make America Great Again”) in red paint on headstones.

The apparent anti-Semitic attack was discovered hours before Trump arrived in Grand Rapids on Monday (Nov. 2) to stage a final rally of his campaign. It shook the Jewish community, which just last year saw the city’s Reform synagogue also vandalized. An extremist group had hoisted neo-Nazi posters, including one that read “A crusade against Semite led subhumans.”

Michigan is a swing state in the presidential election and the Michigan Jewish Democratic Caucus quickly issued a statement: “Make no mistake, this heinous act was committed on the eve of the 2020 election to send an intimidating message to the president’s opponents, and particularly, Jewish voters.”

The Anti-Defamation League said it was appalled by the desecration and will press for an investigation.

Kirshenbaum, who now lives in Brooklyn, where she works as a freelance writer and editor, grew up in the town of Benton Harbor, about 80 miles south of Grand Rapids. She visited her grandparents frequently. The couple, whose names the family wanted to keep private, belonged to Ahavas Israel, a Conservative synagogue. Her grandfather ran a service station in town and was active in his congregation’s burial society, or Chevra Kadisha. He helped care for the cemetery grounds before he died in 1980.

The couple’s headstones, along with those of other relatives, may not have been the ones desecrated because most of them lie flat on the ground. Photos show the vandals picked the upright headstones for maximum visibility.

Anti-Semitism has surged in the U.S. in the last four years, much of it animated by white nationalism. A poll earlier this year found nearly two-thirds of U.S. Jews (63%) believe they are less safe than they were a decade ago. Half are worried that a person wearing a yarmulke, religious skullcap or other public display of Judaism will be physically assaulted (47%) or verbally harassed (50%) “on the street or in a public place,” according to the survey sponsored by the Anti-Defamation League.