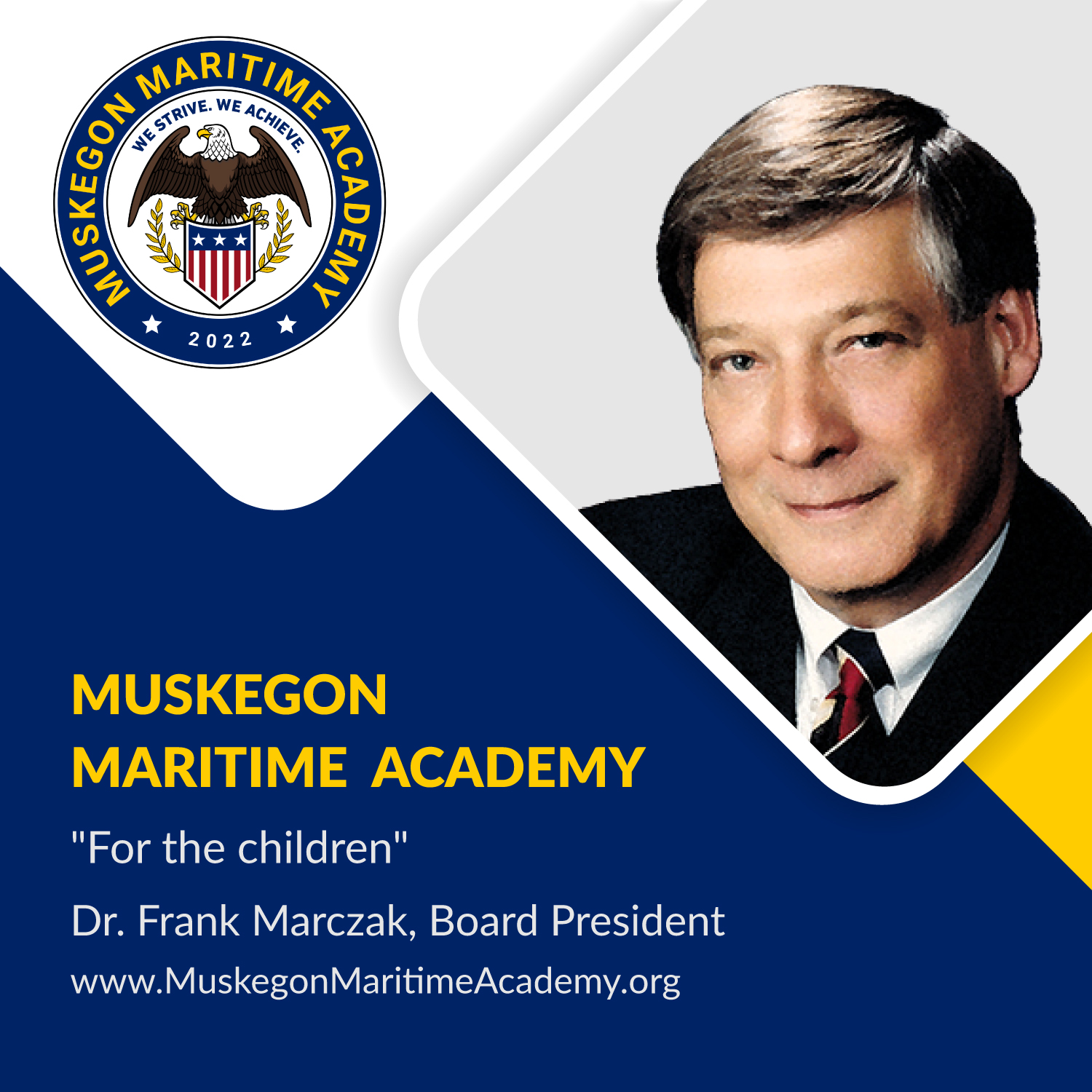 Dr. Marczak served as President of Muskegon Community College from 1995 to 2005. His career in education began as a teacher in the Flint Public School District. He later accepted a position with CS Mott Community College in Flint as an instructor of Physics and Mathematics.

Muskegon Maritime Academy founder Franklin A. Fudail said Dr. Marczak brings immeasurable value and leadership to the academy. “I needed someone who had experience running an educational institution to serve on our board. He ran a large-scale community college, so I knew a K-5 school would be a light assignment for him”, said Fudail.

Dr. Marczak came to Muskegon Community College in 1975 as associate dean for math, science, technology, and physical education. He was later appointed vice-president and dean of faculty before being named college president in 1995,

After retiring from MCC, he served as the Executive Director of the USS Silversides Submarine Museum for 5-years. Dr. Marczak says he looks forward to contributing to the success of the new academy and thinks the community will greatly benefit.

“I believe that the time has come for Muskegon area students to benefit from an academy that the Muskegon Maritime Academy is going to establish in this community. At the heart of the Academy will be studies of math, science, history and discipline. This will result in a student’s success as she/he moves into the upper grades and eventually onto a college education. Preparedness is the key, and the theme of practice and diligence will be front and center”, said Dr. Marczak.

Over the years Dr. Marczak has served on numerous civic organizations as a board member or chairman of the board, including the American Red Cross, Osteopathic Foundation of West Michigan, Harbor Hospice, USS Silversides Submarine Museum, Foundation for Muskegon Community College, and the Muskegon Technical Academy.

Fudail said Dr. Marczak’s educational background matched perfectly with the school’s STEM and Naval focus. “Dr. Marczak has a degree in Physics and Mathematics. He’s taught physics and math at the college level. Our school will have a strong focus on math and science”, stated Fudail.

Dr. Marczak also earned a Master’s from Eastern Michigan University and his Doctorate from the University of Michigan with an emphasis on Occupational Education and Educational Administration.

Fudail said another value Dr. Marczak brings to the school is his background and appreciation for the naval component of MMA and the school’s partnership with the United States Naval Sea Cadet Corps.

“Dr. Marczak served in the U.S. Navy as an (NROTC) midshipman while attending the University of Michigan. He was also enrolled in the Army (ROTC) program during his high school years and became Battalion Commander in his senior year. He understands the value and necessity of the school’s concept”, stated Fudail.

The newly elected board chairman for the new academy said he is very optimistic about the doors Muskegon Maritime Academy will open for young people in the community, “Students attending the Muskegon Maritime Academy will be first in line for career and educational opportunities if they take it seriously and stay with their studies and accept the disciplinary measures they will be offered. I look forward to greeting the staff and students of the MMA in the fall of 2022”.

Former MCC President to serve as Board Leader for Muskegon Maritime Academy added by Tribune on May 8, 2022
View all posts by Tribune →