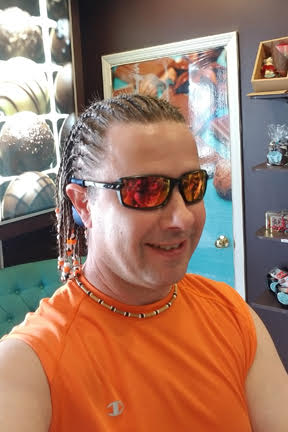 Often in the public eye, local business owner Brian Mckeown has gotten some odd glances and snarky comments while growing his hair out over the last year.

Rest assured, he’s not becoming a hippie or having a midlife crisis. The 55-year-old is trying to do something good and raise awareness for hair donation, along with highlighting the many reasons people may need to wear a wig.

Mckeown owns the UPS store on Henry Street and in North Muskegon and wants to use his business to help inspire more people to make a hair donation. He is reaching out to area salons, offering free shipping for these donations through 2018.

“I am going to visit as many salons as possible,” he said. “Anyone who comes in and does donate their hair, we will ship it for free. There’s lots of places to donate.”

Mckeown’s good friend Kristy suffers from alopecia, an auto-immune condition that causes the body’s immune system to attack hair follicles and causes hair loss, and her sister-in-law fits wigs. He never knew until one day Kristy said she would love to have his hair.

He tried to grow out his hair in the past, but always cut it before it was long enough to donate.

After hearing of Kristy’s situation, he realized that it’s not just cancer patients who rely on hair donations to help look and feel normal.

“During the process, I have taken a lot of criticism. People will say ‘hey miss, hey ma’am,’” he said. “I’ve had a lot of fun with it. We just recently went on a cruise and I had my hair braided in cornrows and beads.”

Once he tells people that he plans to donate his hair to people in need of wigs, their faces change and they are often understanding and supportive.

Mckeown has completed his goal and has cut his hair.

“I don’t think I will go through this again, but you never know,” he said. “I never said I’d run a marathon and I did that once.”

UPS owner grows out hair to raise awareness for hair donation added by Tribune on July 18, 2018
View all posts by Tribune →