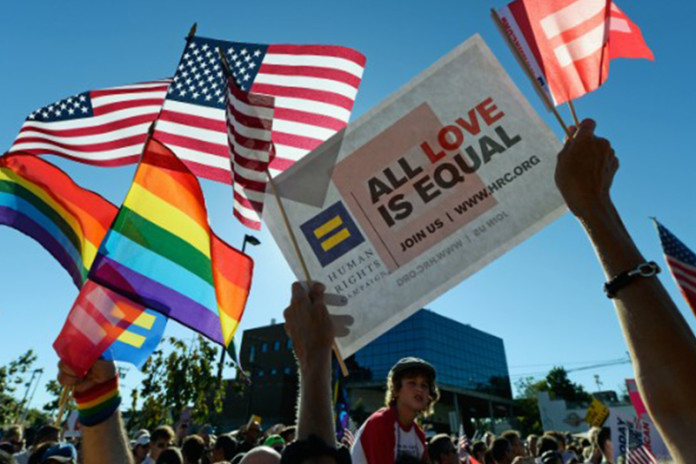 CLEVELAND — Same-sex marriage and transgender rights are emerging as points of serious strain between social conservatives and moderates who are trying to shape the Republican platform, reviving a festering cultural dispute as thousands of party activists and delegates prepare for their convention.

Caught in the middle is Donald Trump, who claims “tremendous support, tremendous friendship” from gays, lesbians, bisexual and transgender people, and has gone further than most party figures to embrace them. Gays, in fact, are one of the few groups Trump has not singled out for criticism. But as the presumptive Republican nominee, he is also trying to assuage doubts about the convictions of his conservatism.

The uncomfortable dynamic Trump has created for himself is perhaps best illustrated by his own calendar. He huddled last month at a Manhattan hotel with hundreds of religious conservatives, many of them — like James C. Dobson, founder of Focus on the Family, and Tony Perkins, president of the Family Research Council — outspoken opponents of new legal protections for gay and transgender people.

A few days later, he took what an aide described as a friendly and supportive call from Caitlyn Jenner, a former Olympic decathlete who came out as a transgender woman last year.

One of the most contentious issues confronting delegates when they meet Monday to debate the platform will be whether to adopt a provision defending state laws that try to prevent transgender people from using the public restroom of their choice. At times Trump has criticized those laws. And he has said Jenner could use whatever bathroom she prefers at his properties.

But he has also promised not to interfere with the platform, which serves as the party’s official declaration of principles.Trump Keeps Distance in GOP Platform Fight on Gay Rights

Even as Trump keeps his distance from the debate, other Republicans who share his more accepting view of gay and transgender issues are working aggressively to tone down some of the platform’s language.

The existing platform, adopted in 2012, is replete with disapproval of homosexuality.It calls court decisions favoring same-sex marriage “an assault on the foundations of our society” and accuses the Obama administration of trying to impose “the homosexual rights agenda” on foreign countries.

Paul E. Singer, a billionaire Republican who has financed gay rights battles across the country, is now funding an effort to write into the platform language more inclusive of gays, lesbians and transgender people. The goal of his group, the American Unity Fund, is not to get the party to endorse same-sex marriage but to add a more open-ended statement that commits the party “to respect for all families,” though there is still fierce resistance from the right.

“We don’t have to say we’re tolerant because we are tolerant of other views,” said James Bopp Jr., a member of the Platform Committee from Indiana who has long supported efforts to make the platform more strongly in favor of traditional marriage. Such language promoting tolerance, he added, would be “redundant and superfluous.”

Advisers for the American Unity Fund, who say they know they are fighting a steep uphill battle, argue that the Republican Party can no longer afford to alienate people on gay rights issues. “We’ve got to make room for people with diverse views on civil marriage,” said Tyler Deaton, the group’s senior adviser. “This platform doesn’t even make room for people who support civil unions or domestic partnerships or people who support basic legal equality.”
(BEGIN OPTIONAL TRIM.)
Both parties adopt new platforms at their conventions every four years. A draft of the 2016 version has been put together over the last several weeks by the Republican National Committee, with help from conservative activists. Members of the Platform Committee will receive the draft Sunday evening and then add or change certain provisions over the next two days.

The draft has not been publicly released, but committee members said in interviews that they expected to see language condemning the 2015 Supreme Court decision legalizing same-sex marriage, embracing the contested “religious liberty” laws that allow people to deny services to gay and lesbian couples, and supporting state efforts to stop transgender people from using the bathroom of their choice.

Though he will almost certainly not mention it when he accepts the nomination next week, Trump’s actions and words on gay rights have been more supportive than any Republican presidential nominee, even if they fall short of the full social and legal acceptance that his expected opponent, Hillary Clinton, has promoted.

He has boasted of his friendships with many gay people, saying “I have so many fabulous friends who happen to be gay.” He has supported AIDS charities for years, and welcomed gay couples at his Palm Beach club when doing so was still considered remarkable. And he has recently started insisting that he would be a better friend to the gay community than Clinton, even though he opposes legal rights like marriage.

But as he tries to convince social conservatives that he is not acting as a moderate, Trump has been largely hands-off with the platform.

“His guys have not shown up and said, ‘Change this, change that,’” David Barton, a Platform Committee member from Texas, said.