The Failing Inside Mission to Tame Trump’s Tongue 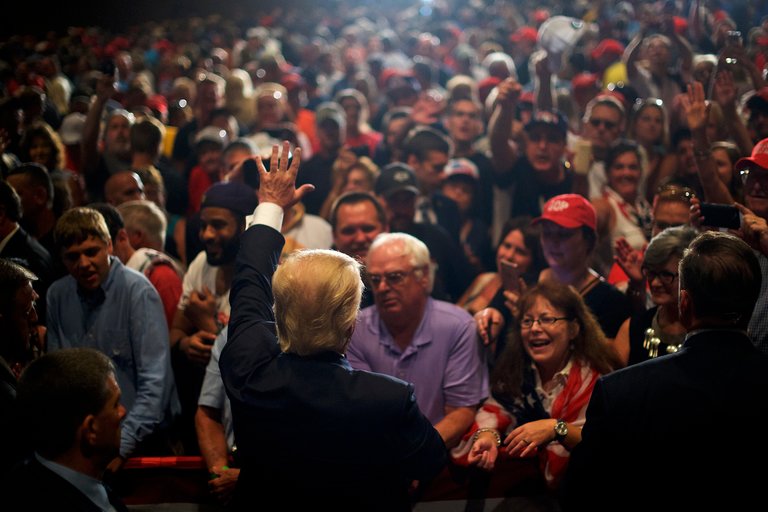 By ALEXANDER BURNS and MAGGIE HABERMAN

Donald Trump was in a state of shock: He had just fired his campaign manager and was watching the man discuss his dismissal at length on CNN. The rattled candidate’s advisers and family seized the moment for an intervention.

Joined by his daughter Ivanka and her husband, Jared Kushner, a cluster of Trump’s confidants pleaded with him to make that day — June 20 — a turning point.

He would have to stick to a teleprompter and end his freestyle digressions and insults, like his repeated attacks on a Hispanic federal judge. Paul Manafort, Trump’s campaign chairman, and Gov. Chris Christie of New Jersey argued that Trump had an effective message, if only he would deliver it. For now, the campaign’s polling showed, too many voters described him in two words: “unqualified” and “racist.”

Trump bowed to his team’s entreaties, according to four people with detailed knowledge of the meeting, who described it on the condition of anonymity. It was time, he agreed, to get on track.

Nearly two months later, the effort to save Trump from himself has plainly failed. He has repeatedly signaled to his advisers and allies his willingness to change and adapt, but has grown only more volatile and prone to provocation since then, clashing with a Gold Star family, making comments that have been seen as inciting violence and linking his political opponents to terrorism.

Advisers who once hoped a Pygmalion-like transformation would refashion a crudely effective political showman into a plausible American president now increasingly concede that Trump may be beyond coaching. He has ignored their pleas and counsel as his poll numbers have dropped, boasting to friends about the size of his crowds and maintaining that he can read surveys better than the professionals.

In private, Trump’s mood is often sullen and erratic, his associates say. He veers from barking at members of his staff to grumbling about how he was better off following his own instincts during the primaries and suggesting he should not have heeded their calls for change.

He broods about his souring relationship with the media, calling Manafort several times a day to talk about specific stories. Occasionally, Trump blows off steam in bursts of boyish exuberance: At the end of a fundraiser on Long Island, New York, last week, he playfully buzzed the crowd twice with his helicopter.

But in interviews with more than 20 Republicans who are close to Trump or in communication with his campaign, many of whom insisted on anonymity to avoid clashing with him, they described their nominee as exhausted, frustrated and still bewildered by fine points of the political process and why his incendiary approach seems to be sputtering.

He is routinely preoccupied with perceived slights, for example raging to aides after Sen. Marco Rubio of Florida, in his re-election announcement, said he would stand up to the next president regardless of party. In a visit to Capitol Hill in early July, Trump bickered with two Republican senators who had not endorsed him; he needled Rep. Peter T. King of New York for having taken donations from him over the years only to criticize him on television now.

And Trump has begun to acknowledge to associates and even in public that he might lose. In an interview on CNBC Thursday, he said he was prepared to face defeat.

“I’ll just keep doing the same thing I’m doing right now,” he said. “And at the end, it’s either going to work, or I’m going to, you know, I’m going to have a very, very nice, long vacation.”

Jason Miller, a spokesman for Trump, said the Republican nominee was still determined to win, and dismissed accounts that he was downcast. Miller pointed to the crowds Trump attracts as a sign of strength.

“Behind the scenes we have a very motivated and very focused candidate in Donald Trump, who knows what he needs to do to win this race,” Miller said.

People around Trump and his operation say they are not ready to abandon hope of a turnaround. But he is in a dire predicament, Republicans say, because he is profoundly uncomfortable in the role of a typical general election candidate, disoriented by the crosscurrents he must now navigate and still relying impulsively on a pugilistic formula that guided him to the nomination.

His advisers are still convinced of the basic potency of a sales pitch about economic growth and a shake-up in Washington, and they aspire to compete in as many as 21 states, despite Trump’s perilous standing in the four states — Florida, Ohio, Pennsylvania and North Carolina — likely to decide the election.

Charles R. Black Jr., an influential Republican lobbyist supporting Trump, said the campaign was in a continuing struggle to tame him.

“He has three or four good days and then makes another gaffe,” Black said. “Hopefully, he can have some more good days.” Of Trump’s advisers, Black said, “They think he is making progress in terms of being able to make set speeches and not take the bait on every attack somebody makes on him.”

Trump’s advisers now hope to steady him by pairing him on the trail with familiar, more seasoned figures — people he views as peers and enjoys spending time with, like former Mayor Rudolph W. Giuliani of New York and former Gov. Mike Huckabee of Arkansas.

Giuliani, who campaigned with Trump early last week, said he did not see the candidate as unmoored or unhappy. If anyone was disconcerted, Giuliani suggested, it was the people steering his campaign.

“He doesn’t seem to be as unnerved by these things that go wrong as the people around him,” Giuliani said. Still, he allowed, “I think it is true that maybe it took him a little while to realize that we’re moving from a primary campaign to a presidential campaign.”

Trump, he said, had become “a little bit more realizing there are certain days left and you’ve got to get messages out on those days.”

Even before Trump’s most recent spate of incendiary comments, Republicans who dealt with him after the primaries came away alarmed by his obvious unease as the de facto party leader. After a meeting in late May between Trump and Karl Rove, the architect of George W. Bush’s presidential victories, Rove told associates he was stunned by Trump’s poor grasp of campaign basics, including how to map out a schedule and use data to reach voters.

Sitting with Rove in the Manhattan apartment of a mutual friend, casino magnate Steve Wynn, Trump said he would compete in states like Oregon, which has not voted Republican since Ronald Reagan’s 1984 landslide. Rove later told people he believed Trump was confused and scared in anticipation of the general election, according to people who have heard Rove’s account.

A few weeks later, when Christie brokered a meeting at Trump Tower between Trump and governors from around the country, Trump offered a desultory performance, bragging about his poll numbers, listening passively as the governors talked about their states and then sending them on their way.

Trump never asked them for their support, three people briefed on the meeting said.

With donors, Trump has been an indifferent ambassador for his campaign. He has resisted making fundraising calls and, during at least two major events in July, in New York and Chicago, burned valuable hours with potential contributors by asking them to go around the room, one by one, giving him their thoughts on whom he should pick as his running mate.

That left little time for the donors to query Trump about policy or strategy, or for him to reassure them about his campaign. Jay Bergman, an Illinois oil executive who attended the event in Chicago, said he wondered if Trump had taken that approach “to avoid answering questions.”

On matters of policy, too, Trump has engaged only fleetingly, and idiosyncratically. Before delivering a policy speech in Detroit on Monday, he delegated the formation of an economic plan to a few conservative economists outside his campaign, who consulted him from time to time and ultimately haggled over the details in his office as he followed their conversation.

Stephen Moore, a Heritage Foundation fellow, said he and Arthur Laffer, the supply-side economist, had tangled over the top tax bracket while Trump observed from behind his desk, eventually siding with Moore. Trump, he said, also expressed strong views about the taxation of interest on business loans, citing his experience as a developer.

“He’s a typical businessman, right?” Moore said. “He lets people argue it out, and Arthur made his case and others made their case.”

“He’s not the world’s expert on the tax code,” Moore added, “but he has very good intuition about how these things will affect real people.”

At the last minute, Trump interjected to direct his advisers to incorporate a tax deduction for the cost of child care in his economic plan. The issue, which Trump had not discussed on the campaign trail, is a favorite of his daughter Ivanka.

Trump’s reliance on his family has only grown more pronounced. Kushner, Trump’s son-in-law, who has no background in politics, has expanded his role: He now has broad oversight over areas including the campaign’s budget, messaging and strategy, with the power to approve spending. Trump has also continued to seek advice from Corey Lewandowski, the campaign manager whom Trump ousted in June at his children’s urging.

Efforts to bring in high-profile, experienced hands have been fruitless. Kushner had suggested enlisting Steve Schmidt, Sen. John McCain’s 2008 presidential campaign manager, but despite having met once with Trump during the primaries and speaking with him a few times, Schmidt never signed on.

Trump’s advisers believe he is nearly out of time to right his campaign. On Tuesday, hours before his explosive comment about “Second Amendment people” taking action if Hillary Clinton is elected, his brain trust reassembled again at Trump Tower in a reprise of their stern meeting in June.

They again urged Trump to adjust his tone and comportment. The top pollster, Tony Fabrizio, gave an unvarnished assessment, warning that Trump’s numbers would only move in one direction, absent a major change.

Trump, people briefed on the meeting said, digested the advice and responded receptively.

It was time, he agreed, to get on track.

The Failing Inside Mission to Tame Trump’s Tongue added by Tribune on August 14, 2016
View all posts by Tribune →