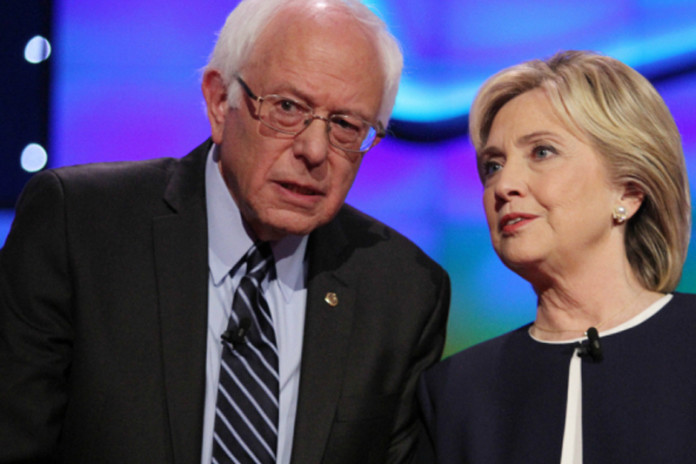 Sanders Said to Endorse Clinton Next Week
After three weeks of private preparations, Sen. Bernie Sanders is expected to endorse Hillary Clinton on Tuesday at a campaign event in New Hampshire, according to three Democrats who have been involved in the planning.
The Clinton campaign Thursday announced the New Hampshire trip but did not provide details, including any mention of Sanders.
But the three Democrats, who spoke on the condition of anonymity to reveal confidential conversations, said that the endorsement was partly the result of daily talks between Clinton’s campaign manager, Robby Mook, and the Sanders campaign manager, Jeff Weaver, about bringing together the two rivals and advancing the policy priorities of Sanders. The discussions included a dinner between Mook and Weaver in Burlington, Vermont, where Sanders has his campaign headquarters.
One possible obstacle to party unity — a fight between Sanders and Clinton allies over a congressional vote on the Trans-Pacific Partnership trade deal — is not seen as a deal breaker to the eventual endorsement, the Democrats said. Sanders wants language added to the party’s policy platform opposing any vote on the deal, despite it being a high priority of the Obama administration.
Sanders has been a staunch opponent of the trade pact, and Clinton, who once called it “the gold standard in trade agreements,” has come out against it as well. But her allies on the platform-writing committee, in line with the wishes of administration officials, have blocked an effort by Sanders allies to insert language opposing it. The Sanders camp will try again at a platform committee meeting in Orlando, Florida, on Friday and Saturday.
Sanders’ endorsement is also expected to ensure that he has a prominent speaking slot at the Democratic convention late this month, the three Democrats said. They added that it was not clear yet when Sanders would speak or whether the convention would include a full roll-call vote on Clinton and Sanders as candidates for the party’s nomination.
Clinton has already begun moving toward Sanders on other issues. On Wednesday she proposed eliminating tuition at in-state public college and universities for families with annual incomes up to $125,000; Sanders, who had supported making public colleges free for all, praised her plan.
The Democrats also said that the Sanders campaign was eager to see Clinton take another step toward him on the issue of health care, perhaps by making a new commitment to press Congress to add a “public option” to the Affordable Care Act. Clinton has long supported the public option, but she also criticized Sanders during their nomination fight for wanting to reopen congressional debate over government-run health care debate and replace the Affordable Care Act with single-payer health insurance.
The refusal by Sanders to endorse Clinton — or even to suspend his campaign after she clinched the nomination June 7 — has increasingly turned the senator into an odd-man-out in the presidential race.
President Barack Obama endorsed Clinton during a joint event in North Carolina on Tuesday, and she is set to campaign with Vice President Joe Biden in Pennsylvania on Friday. She also campaigned in another swing state, Ohio, with Sen. Elizabeth Warren, who shares many progressive policy goals with Sanders — as well as many of his admirers. Warren’s support for Clinton, in particular, threatened to marginalize Sanders among liberals and provide Warren with the highly visible role of progressive champion during the fall election.
While some allies of Sanders worry that his endorsement will be too-little, too-late, he still has some sway over the 12 million Americans who voted for him in the nominating contest. Clinton is eager for party unity, especially since a sizable minority of Sanders supporters is resisting her. With some of them planning to hold events and demonstrations outside the Democratic convention in Philadelphia, there is obvious value to Clinton in making peace with Sanders and having him in her camp.
Asked if anything had changed to bring around Sanders around, the three Democrats said that he wanted to see progress on his policy goals like free public college, but that he was also going through a natural grieving period for his candidacy after a yearlong, hard-fought race.
© 2016 New York Times News Service