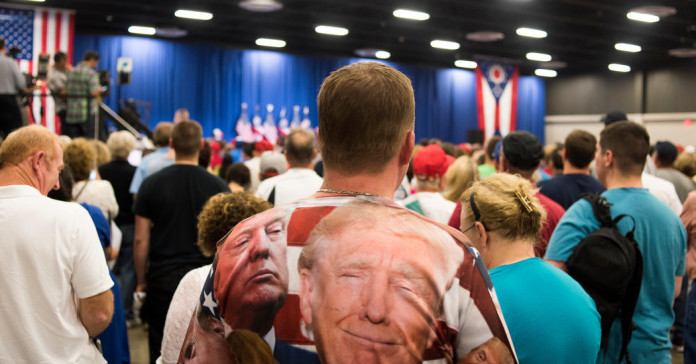 Donald Trump, confronting a daunting electoral map and a significant financial disadvantage, is preparing to fall back from an expansive national campaign and concentrate the bulk of his time and money on just three or four states that his campaign believes he must sweep to win the presidency.
Even as Trump has ticked up in national polls in recent weeks, senior Republicans say his path to the 270 Electoral College votes needed for election has remained narrow — and may have grown even more precarious. It now looks exceedingly difficult for him to assemble even the barest Electoral College majority without beating Hillary Clinton in a trifecta of the biggest swing states: Florida, Ohio and Pennsylvania.
President Barack Obama won all three states in 2008 and 2012, and no Republican has won Pennsylvania in nearly three decades.
With a divisive campaign message that has alienated many women and Hispanics, Trump appears to have pushed several traditional swing states out of his own reach. According to strategists on both sides of the race, polling indicates that Clinton has a solid upper hand in Colorado and Virginia, the home state of Sen. Tim Kaine, her running mate. Both states voted twice for George W. Bush, who assiduously courted Hispanic voters and suburban moderates.
In addition, Trump allies have grown concerned about North Carolina, a Republican-leaning state that has large communities of black voters and college-educated whites — two audiences with which Trump is deeply unpopular.
While Trump is not ready to give up entirely on any of the major battlegrounds, advisers have become increasingly convinced that his most plausible route to the presidency, and perhaps his only realistic victory scenario, involves capturing all three of the biggest electoral prizes on the map, and keeping North Carolina in the Republican column.
Trump and his running mate, Gov. Mike Pence of Indiana, are expected to campaign intensively across those four must-win states, with Trump trumpeting a set of blunt slogans through mass media and Pence focused on shoring up support from conservatives and right-of-center whites.
There is no imminent plan, Trump advisers say, to match Clinton’s spending on television ads. Instead, they intend to aim Trump like a battering ram at a small number of targets, to keep delivering his provocative message on trade, terrorism and immigration.
The primary super PAC backing Trump, Rebuilding America Now, is taking an identical approach: It has reserved airtime only in Ohio, Florida and Pennsylvania. The main outside group supporting Clinton, Priorities USA Action, is advertising in those three states and half a dozen more.
John Brabender, a Republican strategist who has worked extensively in Pennsylvania and the Midwest, said Trump had a real but tenuous path to victory, involving a smaller map of swing states than typical for a presidential nominee. Brabender said Trump would certainly have to seize Pennsylvania, which has not voted Republican since 1988.
“Does Trump have to run the table of the top three targets? Absolutely,” Brabender said. “The fact that we have to worry about winning Pennsylvania to win the presidency tells you it’s a difficult task.”
Trump’s inability to broaden the Republican electoral map has heartened supporters of Clinton, even as Democrats in general have been dismayed by Trump’s tenacity in national polls. In the aftermath of this month’s Republican convention, Trump appeared to enjoy a modest bounce, pulling even or slightly ahead of Clinton in several national surveys conducted before the Democratic convention.
Gov. Terry McAuliffe of Virginia, a longtime political ally of the Clintons, said Clinton could effectively throttle the Trump campaign by winning Virginia, where he is confident of her standing, and one other swing state. He named Florida as the most inviting option.
“If you put a combination together of Florida and Virginia, it’s virtually impossible for Republicans to win the presidency,” McAuliffe said. “Electoral College-wise, we are in a very strong position today.”
© 2016 New York Times News Service