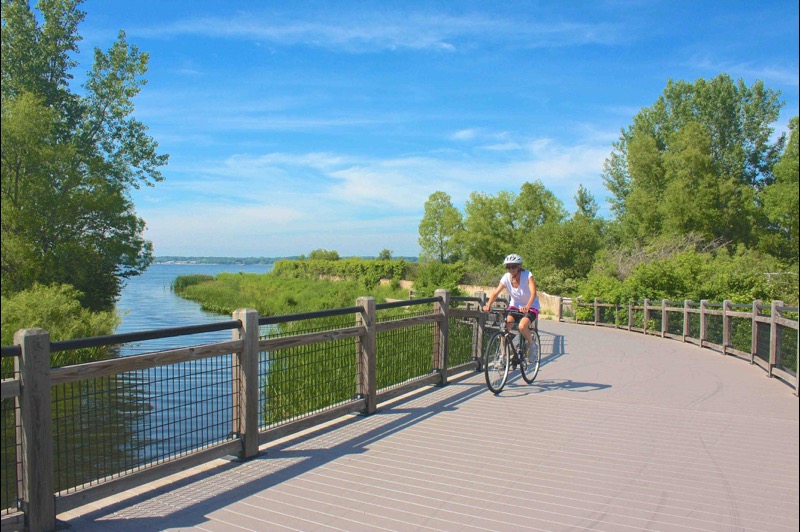 MUSKEGON– The Muskegon Lakeshore Trail – the 12-mile bike and pedestrian pathway from the Muskegon River to Pere Marquette Beach – has fully reopened since high-water damage closed a portion of it early 2020.

The trail between Hartshorn Marina and Lakeside received extensive damage from high water and battering storms in the winter of 2019-20.

The City of Muskegon and the ongoing environmental cleanup efforts of the Amoco “tank farm” property on Muskegon Lake combined to restore the Lakeshore Trail. The city has completed the restoration east of the Amoco site and National Oceanographic and Atmospheric Administration through the West Michigan Shoreline Regional Development Commission completed the rest with Amoco site restoration.

The trail has been raised about two and a half feet to bring it above the current flood zone of Muskegon Lake, according to Leo Evans, city director of the Department of Public Works. The city’s portion of the repair included shoring up the path along the bridge abutments that were washed out by the high water.

The NOAA restoration moved the bike path away from the shoreline and integrated it in the wetland restoration on the northwest corner of the Amoco site. Large limestone rip-rap has been placed along the way to protect the trail from the waves coming off of Muskegon Lake.

The city contracted with bidder Jackson-Merkey Contractors Inc. to complete the eastern half of the repair in a $244,000 project. The Amoco site bike path restoration is part of a $3.1 million overall debris removal project and redevelopment of the wetlands on the Amoco site.

The repairs and subsequent lowering of Great Lakes water levels in the past year should secure the Lakeshore Trail for years to come, Evans said.

The Lakeshore Trail is a key foundation of the extensive trail system through Muskegon County, connecting with the Fred Meijer Berry Junction Trail and Hart-Montague Trail to the north and the Musketawa Trail to the east.