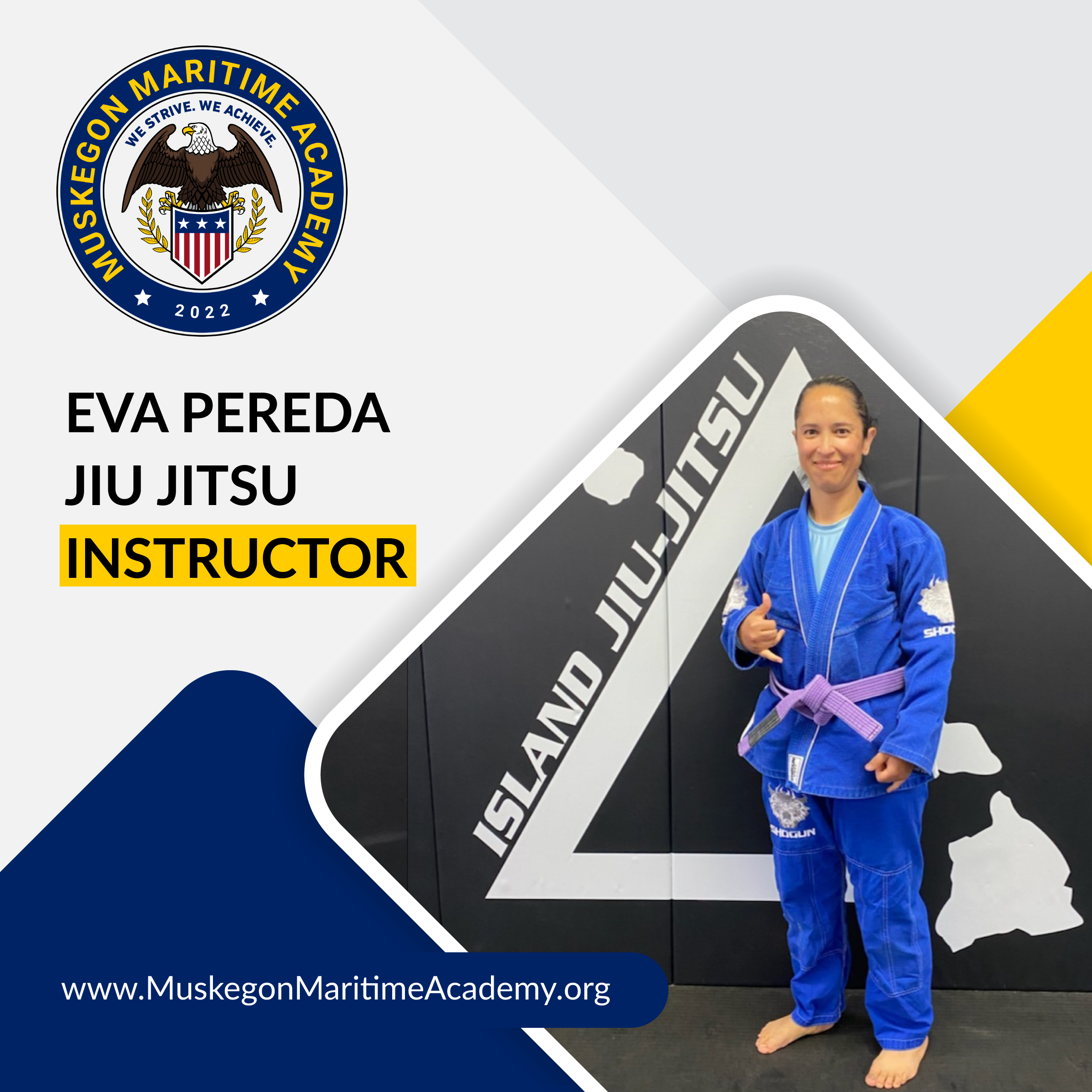 Muskegon – “Don’t worry, I’ll take it easy on you,” the strapping 6’2, 250 lb. man reassured Eva Pereda, his diminutive, 110 lb. opponent as they prepared to face off on the grappling mats.

The man lunged at her, but Ms. Pereda who holds a Purple Belt in Brazilian Jiu-Jitsu, deftly dodged her attacker, causing him to fall to the mat. She pounced on her opponent and used her hands, arms, and legs to keep him grounded during the entirety of their sparring session.

Jiu-jitsu is a great way to learn and develop important skills, like trust and teamwork, said Ms. Pereda, who lives in Roosevelt Park. For example, when “you’re rolling,” or practicing with someone the goal is to make each other better. To accomplish that, you have to trust that your sparring partner isn’t going to hurt you, she said.

“I wish I would have had an opportunity to learn jiu-jitsu when I was in school,” Ms. Pereda said. “Girls tend to be pushed into participating in the more ‘safer’ sports like volleyball. The heck with that. Girls need to learn martial arts too. Jiu jitsu isn’t about fighting, it’s about self-defense.

Using unique activities, like jiu-jitsu to teach students is a big part of what is expected to help students succeed at the school, school founder Franklin Fudail says.

The academy is based on military principles that will emphasize discipline, and self-esteem building exercises, Mr. Fudail noted. While the core curriculum will focus on developing strong reading and math skills, a strong emphasis will also include developing students’ self-esteem and confidence, self-discipline, and leadership.

A portion of the Maritime Academy’s curriculum was developed by staff at West Point, the illustrious U.S. Military Academy is known for producing some of the country’s greatest leaders.

The new charter school will also be the first Naval academy in Muskegon County. The school will be partnering with the United States Naval Sea Cadets Corps for a youth leadership development program that will be incorporated into the curriculum at the school.

“One of the things I love about the school is that it will be based on military principles,” said Ms. Pereda, who served in the U.S. Navy for four years. “Being in the military exposed me to so many possibilities. I participated in firefighter training and later became an elevator technician. I love learning new things.”

Since 2005, Ms. Pereda has worked full-time as a certified health interpreter at Hackley and Mercy hospitals and now for Trinity Health.