Las Vegas – Valentine’s Day is meant to be spent with your one true love and that’s exactly what Muskegon native Raeese Aleem did this year.

Known in fight circles as “The Beast,” the undefeated (16-0, 10 KOs) 122-lb boxer spent his February 14 at the 2300 Arena in Philadelphia knocking out his well-respected opponent in impressive fashion on national television.

“I love boxing,” said Aleem between flights back to his adopted home of Las Vegas. “When I was 14 years old, my dad took me to a boxing gym and from day one, I was just naturally good. I sparred a kid with a bunch of fights and beat him up pretty good, so I stuck with it.”

Under the guidance of trainer Terry Markowski, Aleem went on to compile a 65-10 record as an amateur and was a five-time Golden Gloves State Champion in Michigan. He finished third at the National Golden Gloves in 2010 and 2011 and won gold at the James “Lights Out” Toney Invitational Amateur Boxing Tournament in 2016.

29-year-old Aleem realized a dream and turned professional in 2011 but says his career didn’t always have the forward momentum it has now. Beset by managerial and promotional problems, Aleem was mostly inactive for his first seven years.

“I knew I had to make a move and get something going,” recalls Aleem. “I couldn’t continue doing the same things and hoping for a different result. I was in the gym training every day and nothing was happening, so I saved up and moved to Las Vegas.

“When I first got to Vegas, I was training myself and I had the opportunity to fight an undefeated guy 8-0. At that point, I’d been off for two and half years and I’m fighting a guy like that, who is undefeated… I dominated that fight. I dropped him in first and almost knocked him out. That got the ball rolling.”

After that noteworthy victory caught the boxing world’s eye, Aleem was able to sign with Greg Hannley of prestigious managerial firm Prince Ranch Boxing and well-known promoter Marshall Kauffman of Kings Promotions. While he has kept Muskegon-based trainer Terry Markowski in his corner for his fights, Aleem worked with former world champion and Vegas-based Michigan native Bones Adams as his head trainer before switching amicably to Bobby McRoy five months ago.

“I’m an aggressive boxer” admits Aleem. “I’m good on my feet and I don’t get hit a lot. I give a lot of action in my fights. I like to be diverse in the ring. I can fight either right-handed or left-handed. I’m able to brawl or box equally and adapt to whatever the situation is.

“Raeese is one of the best super bantamweights in the world and the fans that saw his last fight got a small glimpse of his incredible talent,” said manager Hannley. “He’s got a terrific team around him and I have nothing but great things to say about Marshall Kauffman’s Kings Promotions. This will be the year Aleem breaks out.”

“I see something special in Raeese,” added promoter Kauffman. “He’s determined and has great ability. He makes great adjustments to his opponents’ styles during fights.”

These “special” abilities were on full display in Philadelphia, as Aleem stopped a highly respected and usually very durable Texas veteran named Adam Lopez in under four rounds.

“I thought he was phenomenal,” continued Kauffman. “He showed he is one of the best super bantamweights in the world. People don’t do that to Adam Lopez. Even when he fought (former world champion) Daniel Roman, Roman didn’t do that to him.”

Aleem, who was making his national-television debut on the SHOWTIME network’s ShoBox: The New Generation series, says things didn’t even feel real during the fight.

“I still haven’t seen the replay of it. I’m just running it back through my mind. To be honest, it was kind of surreal. I was like watching myself fight. I was very relaxed and calm. I had no nerves at all. I believed in my training and my skills, so I was very confident going in. I was ready to put on a show and I did what I wanted to do.”

Kauffman says Aleem will most likely be back in May, hopefully headlining another ShoBox.

“I would say I’m about a fight or two away from a title shot and I’m ready for it,” said Aleem. “It’s good to know my sacrifice is paying off. My ultimate goal is to be the first world champion from Muskegon.” 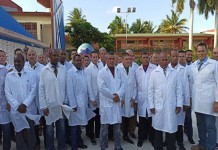