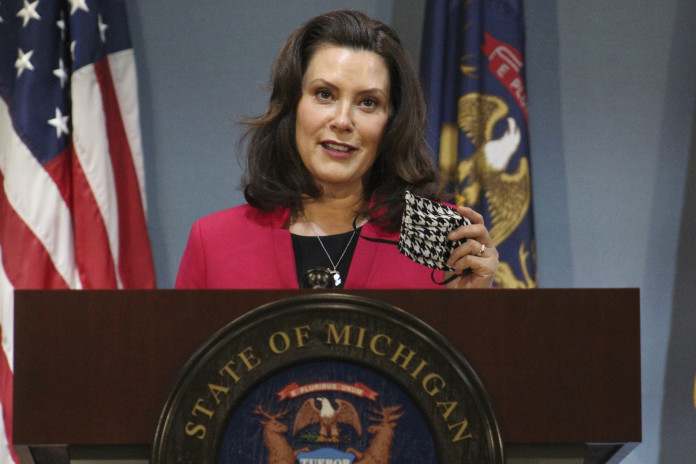 A detailed plot to kidnap the governor from her northern Michigan vacation home was foiled by law enforcement through the use of undercover employees and confidential informants, an unsealed complaint revealed this afternoon.

Officials, including Attorney General Dana Nessel and the U.S. attorneys for the Western and Eastern districts, held a news conference to detail the plot at a press conference this afternoon. Ms. Nessel said hundreds of law enforcement officers working across agencies and state lines were involved in the operation to stop the plot.

The court document describes a plan that took shape over many months beginning in early 2020. The complaint points to six men, including five from Michigan and one from Delaware, but describes other were involved as well.

The federal charges will be prosecuted in the U.S. District Court for the Western District of Michigan. The Michigan Department of Attorney General will be pursuing state charges.

“Federal and state law enforcement are committed to working together to make sure violent extremists never succeed with their plans, particularly when they target our duly elected leaders,” said Andrew Birge, U.S. attorney for the Western District of Michigan.

The men surveilled Governor Gretchen Whitmer‘s vacation home during the day at the end of August and attempted to plan how long it would take law enforcement to reach the residence if they took the governor. In a subsequent chat, one of the conspirators discussed blowing up a nearby bridge to make police response tougher. In mid-September, the men surveilled the home again over two days. More individuals were involved in this surveillance and multiple cars, including at least one with a dashcam, were used.

From the document, it appears Ms. Whitmer’s actions related to COVID-19 were a motivating factor for the men allegedly seeking the kidnap the governor and try her for “treason.”

“She fucking goddamn loves the power she has right now,” the document quotes one of the men as saying. “She has no checks and balances at all. She has uncontrolled power right now,” the man continued.

The plot included a group meeting in Dublin, Ohio, in June 2020. The plan originally contemplated kidnapping the governor from the Capitol or her residence in Lansing before moving to the vacation residence.

At the Ohio meeting, “the group talked about creating a society that followed the U.S. Bill of Rights and where they could be self-sufficient. They discussed different ways of achieving this goal from peaceful endeavors to violent actions. At one point, several members talked about state governments they believed were violating the U.S. Constitution, including the government of Michigan and Governor Gretchen Whitmer.”

Additionally, several members allegedly talked about murdering “tyrants” or “taking” a sitting governor. The plan originally started with the idea of having “200 men” storm the Capitol to take the governor and then try her for “treason.”

The complaint also says the men described met with militia group members several times in June 2020. It also describes several meetings in Michigan and Wisconsin where members participated in firearms training and combat drills. The men also allegedly intended on using explosives in their plan.

The conspirators also allegedly communicated through encrypted online platforms and used code words or phrases to describe their plans. At one point, the men involved were asked to bring personal documents to confirm their identities as concerns grew about law enforcement infiltrating the group.

Ms. Nessel said her office would charge seven other individuals besides the six charged in federal court, all now in custody, linked to the militia group Wolverine Watchmen. She said the felony charges involve terroristic activities like attacking police, the Capitol and kidnapping Ms. Whitmer.

State Police Director Joe Gasper called the case one of the largest in which the department has been involved.

“The nature of this case is rather unprecedented,” he said.