Michigan law enforcement ‘prepared for the worst’ ahead of potential protests 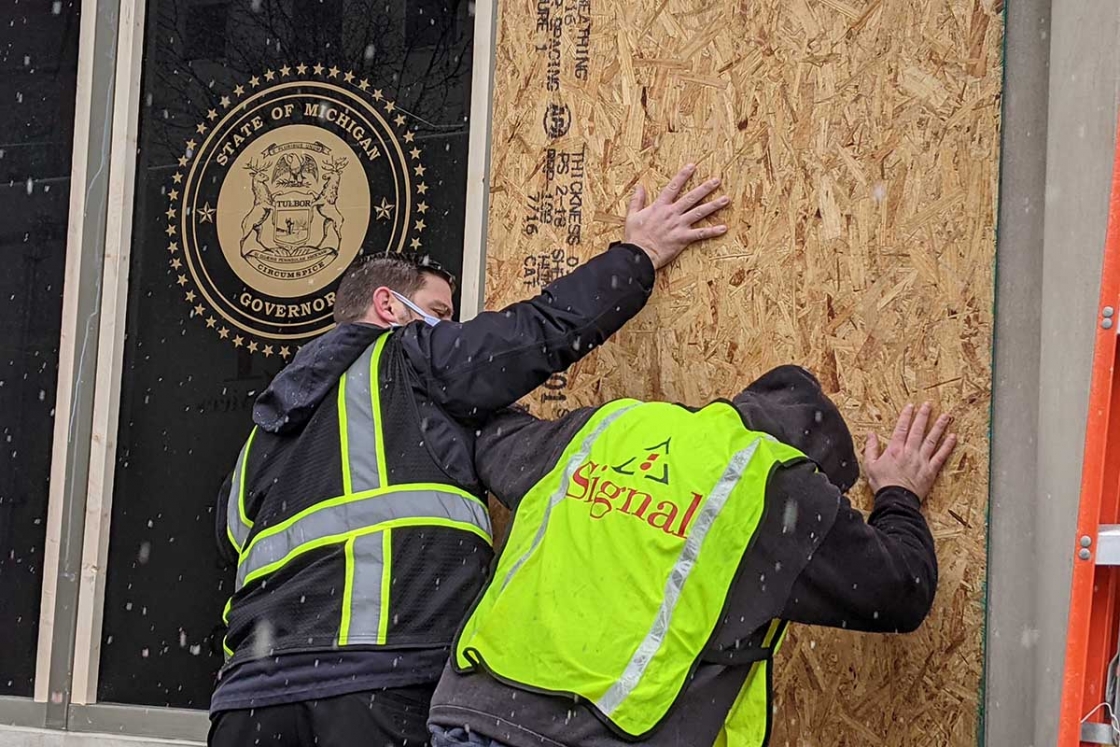 Lansing – Governor Gretchen Whitmer has activated National Guard assistance and staff are securing the Capitol perimeter ahead of potential violent protests on Sunday.

Michigan State Police Col. Joseph Gasper said during a Friday news conference that state and local law enforcement officials in Lansing are working together to avoid a “repeat” of the U.S. Capitol siege last week that left dozens injured and five dead, including a police officer.

“We are prepared for the worst,” Gasper said.

The precautions follow warnings from an internal bulletin from the FBI that armed protests are being planned in all 50 states this week through President-elect Joe Biden’s inauguration in Washington, D.C., next Wednesday, Jan. 20.

Other security measures are both “seen and unseen,” Gasper said. Law enforcement have been increasing police presence on a daily basis since Monday, and on Friday, Capitol staff will begin installing a six-foot fence around the perimeter of the building.

Across the street on Friday, workers began boarding up the governor’s office at the George W. Romney Building. Local businesses and places of worship are also concerned about possible violence, said Lansing Chief of Police Daryl Green.

The precautions follow a chaotic week in Washington, D.C. when a mob of President Donald Trump’s supporters breached the U.S. Capitol while Congress convened to count the nation’s Electoral College votes in a riot that law enforcement were woefully unprepared for.

“Credible threats” led House and Senate leaders on Friday to cancel sessions for lawmakers next Tuesday, Wednesday and Thursday.

The decision came after Gasper said Friday he expected lawmakers would make modifications to the schedule in anticipation of potential armed protests.

The potential violence may affect schedules for Michigan’s lawmakers as well, some of whom have told Bridge Michigan they fear for their safety amid a rise in death threats to public officials.

There will be a “significant” police presence next Tuesday and Wednesday when lawmakers are scheduled to meet in the Capitol, said Gasper, but he expects there to be “modifications” to the session schedule next week.

The heightened security measures will last long after Biden’s inauguration — until at least mid-February, Gasper said.

But Thursday evening, Lackomar said he changed his mind and is advising militia members to stay home after receiving information from law enforcement that groups such as the far-right, extremist Proud Boys may be in attendance.

Local and state law enforcement declined to comment on how many protesters and which groups are expected, but there’s been “a lot of chatter” on social media about the rallies, Special Agent Tim Waters of the FBI’s Detroit Division said during the Friday news conference.

The Dec. 29 FBI memo says that Michigan-based members of the far-right Boogaloo movement are planning violence during protests — with one follower allegedly suggesting using a gasoline-based device with a tripwire to cause a distraction so others could “take” the Capitol.

Waters said the FBI has already opened “numerous investigations” in Michigan related to individuals who were involved in criminal activity last week at the U.S. Capitol.

“We expect the number of investigations to grow as tips continue to be reviewed and new information is reported,” he said.

Green, the Lansing police chief, said he is encouraging all Lansing residents to stay home if they don’t have a “specific purpose” to be downtown.

The measures have already deterred some from participating in possible rallies Sunday.

Lackomar, the Michigan militia leader, said he had concerns about violent clashes between protesters from “outside groups” and an increased presence from law enforcement.

“I’ve been scoping this out for the last two days, and everything there is completely locked down,” he said. “If something goes wrong, we have no way to escape. It’s suicide.”

Michigan law enforcement ‘prepared for the worst’ ahead of potential protests added by Tribune on January 19, 2021
View all posts by Tribune →