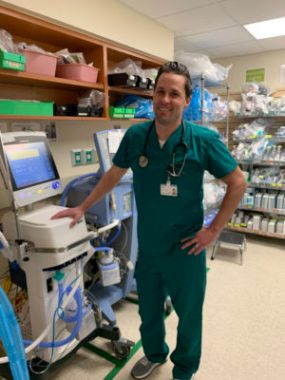 Muskegon – A seasoned respiratory therapist, Keegan Knue understood firsthand the toll that the escalating cases of COVID-19 would take on the Spectrum Hospital staff in Grand Rapids. Before Knue joined the Muskegon Community College faculty in 2017, he spent the previous 12 years working in Spectrum’s Respiratory Therapy Department.

“This was my second home,” he said. “I consider the people who work there as my second family and some are my closest friends.”

So, in between juggling his current teaching workload – which has been totally online since March 13 when MCC stopped in-person instruction, Knue began sharing his expertise at Spectrum one shift per week “doing anything I can to help my fellow healthcare providers during this crisis.”

“We, as respiratory therapists, are frontline providers,” explained Knue. “The treatment and care we provide to these patients are essential in facilitating their recovery and, in others, keeping them alive,” he continued. “A large percentage of the patients coming into hospitals will need the mechanical ventilators – advanced life support – that we manage.”

“It is also the most dangerous portion of our job because this is a respiratory illness transmitted very easily in a droplet aerosol that is produced from a simple cough. We also give breathing treatments that create those aerosols, along with other modalities of care, and maintain the patient’s airway needed for initiation of mechanical ventilation.”

Respiratory therapists are among the unsung heroes in the battle against COVID-19.

Up north at Traverse City’s Munson Hospital, where MCC grads form 50 percent of the respiratory therapy staff, MCC has been providing RT instruction for over a decade. MCC alumni fill important RT roles, as well, at Munson’s facilities in Cadillac, Grayling and Kalkaska.

Knue became proficient as a respiratory therapist during his first stint at Spectrum.

“I took care of every patient population and worked in the ICUs and Emergency Department, Mechanical Circulatory Support (ECMO) between Butterworth and Blodgett campuses,” explained Knue, whose patient populations ranged from the  newborn to the elderly with varying degrees of lung disease, such as cystic fibrosis, COPD, and asthma.

At MCC’s Respiratory Therapy Department, Knue, along with Program Director Deb Grube and faculty member Jennifer Riggs, instructs and trains the next wave of respiratory therapists.

“It’s a family here as well,” added Knue, whose father, Dan, started and guided the MCC Respiratory Therapy Program for nearly 40 years before retiring three years ago. “Everyone devotes and invests an immense amount of time to the success of our students.  My favorite – and least favorite – part is seeing our students graduate.  It is bittersweet. We have had them and known them for 28 months and every December we say goodbye. For most, it is the last time we will see them on campus.”

But, today more than ever, MCC’s loss is Michigan’s gain, as these talented and dedicated alumni put their lives on the line so that others can survive. After all, that’s what families do.

MCC’s Respiratory Therapists on the Frontline Battling COVID-19 added by Tribune on April 10, 2020
View all posts by Tribune →