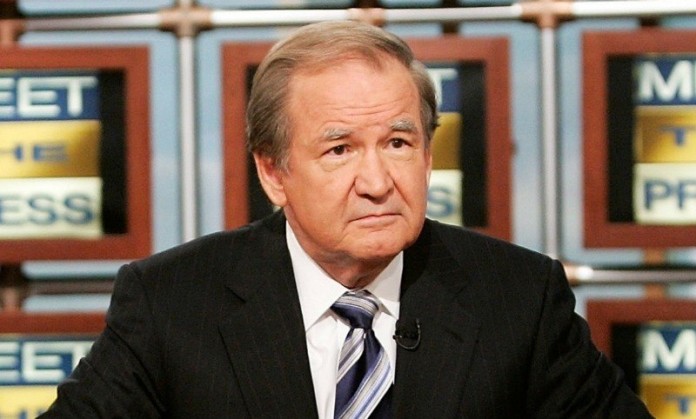 The stunned recoil in this city suggests this bunker buster went right down the chimney. As the French put it, “Il n’y a que la verite qui blesse.” It is only the truth that hurts.
In what sense is the system rigged?

Consider Big Media — the elite columnists and commentators, the dominant national press, and the national and cable networks, said FOX. Not in this writer’s lifetime has there been such blanket hatred and hostility of a presidential candidate of a major party.

But in this election, Big Media have burst out of the closet as an adjunct of the regime and the attack arm of the Clinton campaign, aiming to bring Trump down.
Half a century ago, Theodore White wrote of the power and bias of the “adversary press” that sought to bring down Richard Nixon.

“The power of the press in America,” wrote Teddy, “is a primordial one. It sets the agenda of public discussion; and this sweeping power is unrestrained by any law. It determines what people will talk about and think about — an authority that in other nations is reserved for tyrants, priests, parties and mandarins.”

On ABC’s “This Week,” Newt Gingrich volunteered on Sunday that, “without the unending one-sided assault of the news media, Trump would be beating Hillary by 15 points.”
On this one, Newt is right.

With all due respect, as adversaries, Harry Reid and Nancy Pelosi are not terribly formidable. Big Media is the power that sustains the forces of globalism against those of Americanism.
Is the system rigged? Ask yourself.

For half a century, the U.S. Supreme Court has systematically de-Christianized and paganized American society and declared abortion and homosexual marriage constitutional rights.

Where did these unelected jurists get the right to impose their views and values upon us, and remake America in their own secularist image? Was that really the Court’s role in the Constitution?

How did we wind up with an all-powerful judicial tyranny in a nation the Founding Fathers created as a democratic republic?

There are more than 11 million illegal immigrants here, with millions more coming. Yet the government consistently refuses to enforce the immigration laws of the United States.

Why should those Americans whose ancestors created, fought, bled and died to preserve America not believe they and their children are being dispossessed of a country that was their patrimony — and without their consent?

When did the country vote to convert the America we grew up in into the Third World country our descendants will inherit in 2042?

In the Civil Rights Act of 1964, a Congressional majority voted to end discrimination against black folks.

When did we vote to institute pervasive discrimination against white folks, especially white males, with affirmative action, quotas and racial set-asides? Even in blue states like California, affirmative action is routinely rejected in statewide ballots.
Yet it remains regime policy, embedded in the bureaucracy.

In 2015, in the Democratic primaries, the big enthusiastic crowds were all for 75-year-old Socialist senator Bernie Sanders.

We now know, thanks to leaked emails, that not only the superdelegates and the Obama White House but a collaborationist press and the DNC were colluding to deny Sanders any chance at the nomination.

The fix was in. Ask Sanders if he thinks the system is rigged.
If there is an issue upon which Americans agree, it is that they want secure borders and an end to trade policies that have shipped abroad the jobs, and arrested the wages, of working Americans.

Yet in a private speech that netted her $225,000 from Brazilian bankers, Hillary Clinton confided that she dreams of a “common market, with open trade and open borders” from Nome, Alaska, to Patagonia.

That would mean the end of the USA as a unique, sovereign and independent nation. But the American press, whose survival depends upon the big ad dollars of transnational corporations, is more interested in old tapes of the Donald on The Howard Stern Show.

As present, it appears that in 2017, we may get a government headed by Hillary Clinton, and an opposition headed by Paul Ryan and Mitch McConnell.

Is that what the people were hoping for, working for, voting for in the primaries of 2016? Or is this what they were voting against?Big money and the media power of the establishment elites and the transnationals may well prevail.

And if they do, Middle America — those who cling to their bibles, bigotries and guns in Barack Obama’s depiction, those “deplorables” who are “racist, sexist, xenophobic, homophobic,” who are “not America” and are “irredeemable” in Hillary Clinton’s depiction — will have to accept the new regime.

But that does not mean they must love it, like it or respect it.

Because, in the last analysis, yes, Virginia, the system is rigged.
Patrick J. Buchanan is the author of the new book “The Greatest Comeback: How Richard Nixon Rose From Defeat to Create the New Majority.” To find out more about Patrick Buchanan and read features by other Creators writers and cartoonists, visit the Creators website atwww.creators.com