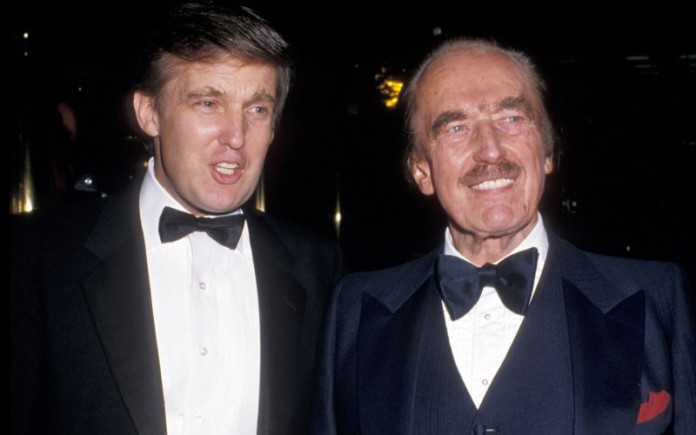 The throngs of New Yorkers who poured into Coney Island on a sweltering Sunday in July 1939 — shuffling past the rides, hot-dog stands and freak shows — confronted one last spectacle blaring just beyond the surf.

At 65 feet and outfitted with enormous Trump signs, the yacht called the Trump Show Boat was hard to miss. And that was the point.

Its loudspeakers blasted recordings of “The Star-Spangled Banner” and “God Bless America” over and over, compelling many sunbathers, reluctant to be seen as unpatriotic, to stand and salute each time. When the boat floated swordfish-shaped balloons — redeemable for $25 or $250 toward a new Trump Home — toward the shore, bathers nearly rioted as they raced to snatch them up.

Fred C. Trump, the owner of the boat and the master builder of solid homes in Brooklyn and Queens, is often considered a point of contrast to his flashy son Donald, the brash developer who built gilded towers in Manhattan, and became a tabloid fixture, television personality and now, Republican presidential nominee.

But Donald J. Trump inherited more than just a real estate empire from his father. As a salesman, competitor, courter of politicians and controversy and above all, as a showboating self-promoter, Fred Trump was the Donald Trump of his day.

To demonstrate to potential homeowners the futility of renting, Fred wallpapered a model home in rent receipts. In newspaper advertisements for his Shore Haven apartments in Brooklyn, he referred to himself under an illustration of the Statue of Liberty as “Fred C. Trump, acting as a free and rugged individualist to meet the basic need for shelter.”

Decades before his son splashed the family name across his first tower, his father christened a grocery in Woodhaven “Trump Market,” and his Coney Island housing complex “Trump Village.”

“He was a good salesman,” Trump said in a recent interview in his Trump Tower office. “He had some beautiful ads. Don’t forget that was our internet.”

Trump’s childhood friends have said they see in him his father’s intensity, but also a constant and often palpable need to please and impress the patriarch who ruled his family with a firm hand. Even today, Donald Trump seems to bathe in his father’s approval. A framed photo of Fred Trump faces him on his cluttered desk.

Asked what his father, who died in 1999, would have thought about his run for president, Trump, 70, said, “He would have absolutely allowed me to have done it.”

Born in 1905 to German immigrants who spoke mostly German at home, Fred Trump was already working as a butcher’s delivery boy at age 10. While studying at Richmond Hill High School, he held down part-time jobs and pumped his brainy younger brother, John, who later went on to teach at the Massachusetts Institute of Technology, for summaries of assigned reading.

“Daddy was interested in the reading of the books,” said John Trump’s daughter, Karen Ingraham. “Uncle Fred was more of the doer.”

Before he turned 21, Fred Trump and his mother, Elizabeth, started the construction company E. Trump and Sons, so named because only she was old enough to sign the checks. The business took off.

At age 28, he won the mortgage service business of a troubled German bank, and by 1938, was bragging in the papers about the “throngs visiting” his developments in Brooklyn. That year, The Brooklyn Daily Eagle referred to him first as a prominent Long Island builder, then as the “Henry Ford of the home-building industry.” His ego grew accordingly.

He took pride in his intellectual abilities, daring people to stump him with enormous numbers to calculate. “He wanted to show that he could add them in his head,” said Barbara Giffuni, a daughter-in-law of Vincent Giffuni, another builder and one of Fred Trump’s good friends.

But Fred Trump owed at least as much to federal housing programs, political connections and an influx of immigrants and veterans as he did to his brainpower.

Almost as soon as President Franklin D. Roosevelt created the Federal Housing Administration in the 1930s, Trump eagerly sought to make use of its loan subsidies. “The working classes have been fully awakened as to the benefits of homeownership under the FHA. 25-year mortgage plan,” he said at the time.

To really get their attention, he attached price tags like $3,999.99. “One penny more and it won’t sell,” Trump said his father had taught him.

While his Trump Show Boat promotions displeased the Parks Department, which slapped him with a summons for advertising without a license, Jeanette G. Brill, Brooklyn’s first female magistrate, imposed only a $2 fine. Trump boasted to The Eagle that “woman judges are far more sympathetic to the cause of FHA Housing and far more appreciative of novel advertising ideas and good music than are the men judges.”

The war broke out and Fred Trump moved his young family — his wife, Mary Ann, and three children, Freddy, Maryanne and Elizabeth — to Virginia, where he built more than 1,000 apartments for the Navy.

He soon returned to New York and had two more children, Donald and Robert.

He treated his extended family like business partners. On Sunday mornings, he would drop all of his children off at the house of his sister, Elizabeth, and ask his brother-in-law, who worked six days a week, to check his books. To avoid Fred, the family started attending an earlier church service, said John Walter, his sister’s son, who eventually did his uncle’s books.

Fred brought that hard-charging approach home. While his oldest son, Freddy, crumbled under the pressure, Donald blossomed under it.

He also saw his father’s tough negotiating style, even at home.

One time some of Donald Trump’s friends were vexed why his wealthy father would not buy his son a new baseball glove. Trump said it was because his father suspected him, correctly, of playing dumb about the price of the mitt he wanted, and of trying to get the salesman to go along with it.

Fred Trump’s projects housed thousands of GIs and made him rich and powerful. Some tenants loved Trump for his solid, well-priced apartments; others loathed him for his suspected exclusion of blacks from his properties. (Woody Guthrie, a tenant of Trump’s Beach Haven apartments, wrote in 1950, “I suppose/ Old Man Trump knows/ Just how much/ Racial Hate/ he stirred up/ In the bloodpot of human hearts.”)

In the 1970s, Donald Trump, who had just taken over the business, would fiercely contest a housing discrimination lawsuit brought by the Justice Department, before ultimately agreeing to change renting practices.

And years before Trump became known for spreading campaign money around, regardless of party affiliation, he watched his father court Abraham D. Beame, who would become mayor, and the other power brokers of Brooklyn’s Madison Democratic Club.

Trump, who is particular about his physical appearance, also takes after his father in other ways. He pointed out a picture of his father, immaculately dressed and coifed, in a book of family photos that his own children gave to him for his 70th birthday in June.

“My father was very vain,” he said.

There were differences. Donald Trump wanted to build in Manhattan. His father didn’t see the point. “This is nice and easy, what are you doing over there?” Fred would say to his son, according to Walter, who worked with his cousin and uncle.

Trump ultimately eclipsed his father, though Fred Trump, who was married to his wife for more than 60 years, joked to his thrice-married son that the “one place you’ll never beat me is with the marriage stuff,” Donald Trump said.

In the last decade of his life, the early stages of Alzheimer’s disease slowed Fred Trump, according to his friends and relatives, and he died at the age of 93 with difficulty recognizing people.

Trump said he wasn’t scared that the disease might be the last thing he inherits from his father. “Do I accept it? Yeah,” he said. “Look, I’m very much a fatalist.”

At Fred Trump’s wake, at the Frank E. Campbell funeral home, his son stepped forward to address the political, real estate and society power brokers in the crowd. One attendee recalled Donald Trump’s unorthodox ode to his father, which Trump confirmed.

“My father taught me everything I know. And he would understand what I’m about to say,” Trump announced to the room. “I’m developing a great building on Riverside Boulevard called Trump Place. It’s a wonderful project.”