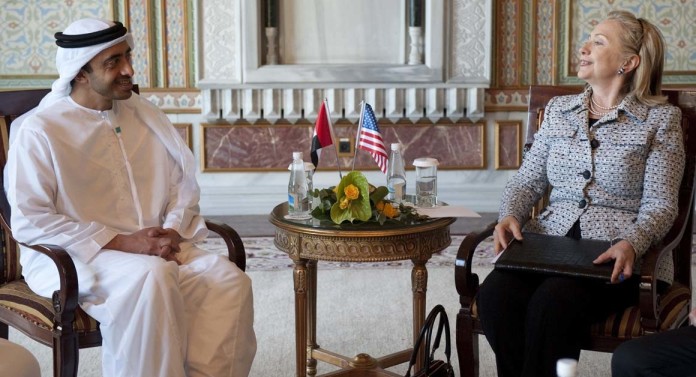 The kingdom of Saudi Arabia donated more than $10 million. Through a foundation, so did the son-in-law of a former Ukrainian president whose government was widely criticized for corruption and the murder of journalists. A Lebanese-Nigerian developer with vast business interests contributed as much as $5 million.

For years the Bill, Hillary and Chelsea Clinton Foundation thrived largely on the generosity of foreign donors and individuals who gave hundreds of millions of dollars to the global charity. But now, as Hillary Clinton seeks the White House, the funding of the sprawling philanthropy has become an Achilles’ heel for her campaign and, if she is victorious, potentially her administration as well.

With Clinton facing accusations of favoritism toward Clinton Foundation donors during her time as secretary of state, former President Bill Clinton told foundation employees Thursday that the organization would no longer accept foreign or corporate donations should Hillary Clinton win in November.

But while the move could avoid the awkwardness of Bill Clinton jetting around the world asking for money while his wife is president, it did not resolve a more pressing question: how her administration would handle longtime donors seeking help from the United States, or whose interests might conflict with the country’s own.

The Clinton Foundation has accepted tens of millions of dollars from countries that the State Department — before, during and after Hillary Clinton’s time as secretary — criticized for their records on sex discrimination and other human-rights issues. The countries include Saudi Arabia, the United Arab Emirates, Qatar, Kuwait, Oman, Brunei and Algeria.

Saudi Arabia has been a particularly generous benefactor. The kingdom gave between $10 million and $25 million to the Clinton Foundation. (Donations are typically reported in broad ranges, not specific amounts.) At least $1 million more was donated by Friends of Saudi Arabia, which was co-founded by a Saudi prince.

Saudi Arabia also presents Washington with a complex diplomatic relationship full of strain. The kingdom is viewed as a bulwark to deter Iranian adventurism across the region and has been a partner in the fight against terrorism across the Persian Gulf and wider Middle East.

At the same time, though, U.S. officials have long worried about Saudi Arabia’s suspected role in promoting a hard-line strain of Islam, which has some adherents who have been linked to violence. Saudi officials deny any links to terrorism groups, but critics point to Saudi charities that fund organizations suspected of ties to militant cells.

Brian Fallon, a spokesman for the Clinton campaign, said the Clintons and the foundation had always been careful about donors. “The policies that governed the foundation’s activities during Hillary Clinton’s tenure as secretary of state already went far beyond legal requirements,” he said in a statement, “and yet the foundation submitted to even more rigorous standards when Clinton declared her candidacy for president, and is pledging to go even further if she wins.”

Clinton’s opponent, Donald Trump, could face his own complications if he becomes president, with investments abroad and hundreds of millions of dollars in real estate debt — financial positions that could be affected by moves he makes in the White House. And on Friday, Paul Manafort resigned as chairman of the Trump campaign, in part because of reports about his lucrative consulting work on behalf of pro-Russian Ukrainian politicians.

Still, Trump has seized on emails released over the past several weeks from Clinton’s tenure as secretary of state, in which a handful of donors are mentioned. He has attacked her over an email chain that showed Douglas J. Band, an adviser to Bill Clinton, seeking to arrange a meeting between a senior U.S. government official and Gilbert Chagoury, a Lebanese-Nigerian real estate developer who donated between $1 million and $5 million. Chagoury explained through a spokesman that he had simply wanted to provide insights on elections in Lebanon.

Some emails and other records described donors seeking, and in some cases, obtaining meetings with State Department officials. None showed Hillary Clinton making decisions in favor of any contributors, but her allies fear that additional emails might come out and provide more fodder for Trump.

Craig Minassian, a spokesman for the foundation, said the decision to forgo corporate and foreign money had nothing to do with the emails. The foundation will continue to raise money from U.S. individuals and charities.

“The only factor is that we remove the perception problems, if she wins the presidency,” he said, “and make sure that programs can continue in some form for people who are being helped.”

But Tom Fitton, the president of Judicial Watch, a conservative group that has sued to obtain records from Hillary Clinton’s time at the State Department, said “the damage is done.”

“The conflicts of interest are cast in stone, and it is something that the Clinton administration is going to have to grapple with,” Fitton said. “It will cast a shadow over their policies.”

And in an election year in which a majority of Americans say they do not trust Clinton, even some allies questioned why the foundation had not reined in foreign donations sooner, or ended them immediately.

A Bloomberg poll in June showed that 72 percent of voters said it bothered them either a lot or a little that the Clinton Foundation took money from foreign countries while Hillary Clinton was secretary of state. In a CNN/ORC International Poll the same month, 38 percent of voters said Bill Clinton should completely step down from the foundation, while 60 percent said he should be able to continue working with the foundation if his wife became president. Bill Clinton said Thursday that he would leave the foundation’s board if Hillary Clinton won.

Ed Rendell, a former Democratic governor of Pennsylvania, said the foundation should be disbanded if Hillary Clinton wins, and he added that it would make sense for the charity to stop taking foreign donations immediately.

“I think they’ll do the right thing,” Rendell said, “and the right thing here is, without question, that the first gentleman have nothing to do with raising money for the foundation.”