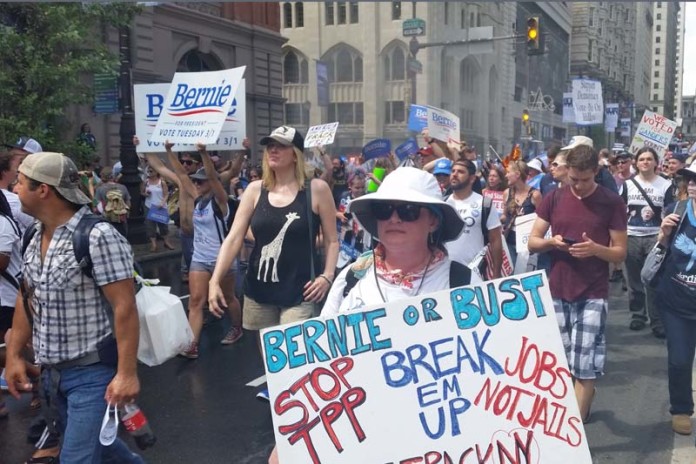 Democrats Struggle for Unity on First Day of Convention
ALAN RAPPEPORT, YAMICHE ALCINDOR and COLIN MOYNIHAN
PHILADELPHIA — Democratic Party leaders scrambled on Monday night to rescue their convention from political bedlam as supporters of Sen. Bernie Sanders erupted in boos, jeers and protests against Hillary Clinton after an email leak showed that party officials had sought to undermine Sanders in their race for the nomination.
Convention organizers shifted Sanders to a more prominent speaking slot in hopes that he would soothe his most ardent backers. Those supporters have become increasingly frustrated with the party’s embrace of Clinton, whom they see as too accommodating to big business and Republicans.
Sanders himself sent a text message imploring his delegates, “as a personal courtesy to me, to not engage in any kind of protest on the floor.” The Clinton and Sanders operations also combined their teams on the convention floor to coordinate appeals to delegates who might be disruptive.
The tension reverberated from the floor of the hall to the stage. By 9:30 p.m., the outbursts had turned so loud and persistent that comedian Sarah Silverman scolded the Sanders supporters who were shouting over her remarks.
Clinton campaign officials, in another bid to placate the party’s left wing, picked Sen. Elizabeth Warren to deliver the keynote address on Monday night, hoping that her searing denunciations of Donald Trump, the Republican nominee, would unify the delegates in the hall. Clinton had privately chosen Warren days ago, campaign officials said, but announced her on Monday morning to try to set a positive tone for the first day of the convention and start closing ranks.
Throughout the day, more than 1,000 supporters of Sanders took to the streets of Philadelphia to vent their frustration. Some targeted Clinton with a taunting chant from last week’s Republican convention: “Lock her up!” Other protesters gathered outside the downtown Ritz-Carlton, where many major donors to Clinton’s campaign were staying.
The Democratic National Committee released a statement on Monday, signed by an array of party leaders but not Rep. Debbie Wasserman Schultz of Florida, the departing DNC chairwoman, offering “a deep and sincere apology to Senator Sanders, his supporters and the entire Democratic Party for the inexcusable remarks made over email.”
© 2016 New York Times News Service