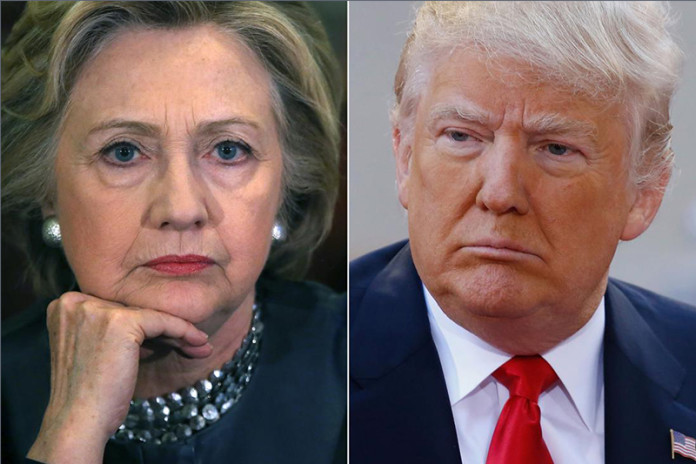 Cries for Unity Are Ill-Suited To Divisive 2016 Candidates

No moment in the 2016 presidential campaign has cried out more for a unifying candidate than the police shootings of two black men last week and the ensuing national uproar, followed by the shocking sniper ambush that killed five police officers in Dallas.

And no other moment has revealed more starkly how hard it is for Donald Trump and Hillary Clinton to become that candidate.

Never have two presidential nominees been as unpopular as Trump and Clinton, and they are not fully trusted by their own sides, nor are they showing significant crossover appeal in the polls. Trump, the self-described champion of law and order, is also the political figure many people blame for sowing division and hatred with his attacks on undocumented immigrants, Muslims, Mexicans and others. Rather than defuse tension, he electrifies crowds and vanquishes rivals through provocations that he delights in calling politically incorrect.

Of the two, Clinton would seem more able, and driven, to try to bring the country together. She has a large following among black voters and speaks ardently about the need for “respect” and “love and kindness.” After Dallas, she called on “white people to understand how African-Americans feel every day.” Yet many on the right and some on the left dislike her intensely, and even her admirers say she lacks the public emotion, oratorical skills and reputation for honesty to persuade large numbers of Americans to see things her way.

The need for a reassuring and healing voice has come at a particularly bad time for the two presumptive presidential nominees. For many Americans, Clinton’s credibility was further damaged last week as the FBI director, James Comey, sharply criticized her for being “extremely careless” about her use of private email as secretary of state. At the same time, Trump alienated many voters with his mixed comments about Saddam Hussein and his defensiveness over a Twitter post that many people regarded as anti-Semitic.

“Trump is 100 percent saying the right things about police and respecting authority, but then he says these other comments that are too weird for voters to ignore,” said Fred L. DeLuca, a Trump supporter and former police officer who owns a graphic supply store in Youngstown, Ohio. “And Hillary — I don’t trust what she says about law enforcement, not at all.”

Barack Obama did manage to excite some members of both parties in 2008 with his historic candidacy, and Bill Clinton’s new-generation image and empathic personality appealed across party lines in 1992. And in moments of national crisis, presidents have shown the ability to unify the country, if fleetingly, as George W. Bush did after 9/11.

But they did not have to sell themselves to voters against such an intense combination of terrorism, mass shootings, police and gun violence, social unease and free-floating fear.

“The sense of alienation and estrangement is so great today that it’s hard to unite people, and these candidates haven’t done it,” said the Rev. Jesse Jackson, a Clinton backer.

The historian Doris Kearns Goodwin compared the current political climate to the Civil War era and recalled Lincoln’s “House Divided” speech, during his 1858 Senate campaign, in which he analyzed the deep divisions between the North and the South and predicted that the country would become more united — but first slavery had to be eliminated or made the law of the land. She said Lincoln proved to be a president who would go to war to unify the country, and credited President Lyndon B. Johnson. and the Rev. Dr. Martin Luther King Jr. with mobilizing forces around the country and in Congress in the 1960s to pass civil rights legislation that — while highly divisive — also brought greater equality for Americans.

“If Trump was a more disciplined, focused candidate, this could be his moment to win over Americans because the desire for a strong leader is great in moments of turbulence,” she said. “But look at his record. After Brexit, he talked about the weak currency helping his golf course. After the Orlando shootings, it was, ‘I told you so.’ After the FBI report on Hillary, he couldn’t focus on that. Voters want candidates to show we can trust them, and both candidates have this problem.”

In several recent polls, roughly two-thirds of Americans said that Clinton was not honest and trustworthy; Trump drew similar numbers on the question. These polls were conducted before the FBI director rebuked Clinton over her private email and handling of classified material.

Trump, whose poll ratings grew after his forceful responses to terrorist attacks in Paris and San Bernardino, California, tried to sound similarly resolute Friday evening, saying in a video that law enforcement was “the force between civilization and total chaos.”

And, he said, “Now is the time for prayers, love, unity and leadership.”

These remarks were relatively restrained for him, and his advisers hope that he can build on his image as a powerful, no-nonsense executive and attempt to unify voters. He is the choice of most voters who say they are particularly interested in electing a strong leader — a little over one-quarter of the electorate, according to a recent Bloomberg Politics survey. A Gallup poll conducted in May showed that six in 10 Americans consider him a strong and decisive leader.

Vernita Blocker, a retired social work administrator from Lindenwold, New Jersey, supports Clinton but said she worries that Trump may be better suited to capitalize on Americans’ concerns about fraying social order.

“The more people are afraid, the more it plays into Trump’s hands, because they will want a strongman-type president,” Blocker said. “Hillary has to find more ways to persuade people that she could really unite the country despite all the people who don’t like her.”

Yet Trump is still having trouble uniting his own party, while Clinton appears further along with Democrats.

The conventions this month will be huge opportunities for the nominees to galvanize the faithful, but also a chance to reach out to the other side with traditionally positive speeches about their hopes for the country.

On policy, Clinton is also eager to find common ground on gun control and criminal justice reform — issues that resonate with many voters at a time of seemingly endless violence. While new gun laws are opposed by many on the right, she wants Americans to at least talk about finding solutions — if not uniting behind them.

“I think ‘unity’ is the wrong goal, and what we need can’t be achieved by lofty oratory alone,” said Wendy L. Wall, an associate professor of history at the State University of New York at Binghamton. “Often in our past, unity has meant burying disagreements rather than solving common problems. What we need now is someone who can work across differences, not erase them.”

“I think there is no way Trump could do this,” she added. “I think the jury is still out on Clinton.”