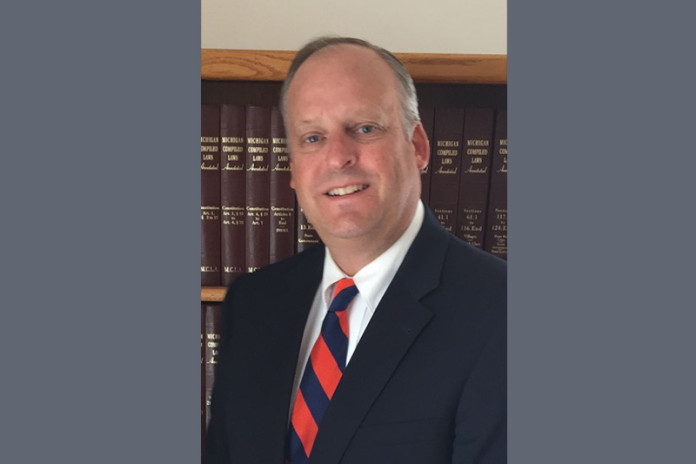 David Kortering is running for Muskegon County Probate Court Judge for several reasons. Probably the most important has to do with the expanding workload of family law cases that have been filling up the dockets over the past several years, many which involve child neglect/abuse, juvenile delinquency, divorce, custody, parenting time, child support, guardianships, and personal protection orders (PPOs).

Because of an increase in child neglect and abuse cases, and combined with new state mandates, there has been a major reorganization of Muskegon County’s courts to included stronger family court coverage. For these reasons, Kortering is in the right place at the right time to run for this position.

“The docket for this bench position is probably comprised of about 75% family law cases,” Kortering said. “This includes a large number of neglect/abuse and delinquency cases that I am very qualified to oversee.”

Kortering, principal in the David B. Kortering Law Office and with 18 years of experience representing thousands of parents and children in the child welfare system, believes family issues are very complex and require a judge who has experience in many different facets of this law. “This position is one that requires several years of experience,” he said. “For me, there would be a zero learning curve.”

His learning curve in family law began in 1998, the same year a new court “mantra” came out: one family – one judge. “This means that one judge is tied to all cases involving the same family, such as custody and welfare,” Kortering said. “The timing of my beginning in this field and the mantra is interesting.”

Besides his desire to preside over family law matters, Kortering has other agendas that he would like to pursue as a probate court judge.

“I’d like to start a mediation services pilot program for domestic relations cases, including those where child custody and parenting time are in conflict,” he said. “Disputes should be settled in timely and amicable ways – and mediation works for best interests of the children.”

Kortering would also like to initiate a PPO court for non-domestic cases (those where there is not a romantic or marital relationship). “PPO matters can tie up the court system and require special attention in order to protect the litigants and the integrity of the court system,” he said.

If Kortering’s name sounds familiar around Muskegon County, it’s because his father – the late Vernon Kortering – was a well-known and hard-working lawyer in the community for many years. “A lot of people knew my Dad because he helped thousands of families,” he said. “He was my mentor and instilled family values and a strong work ethic in me.”