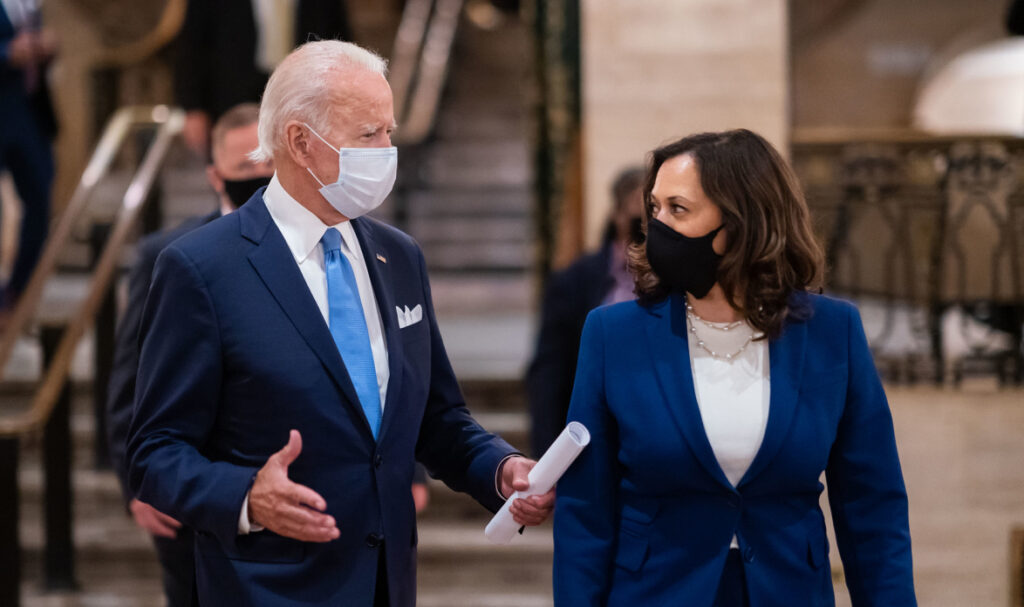 WASHINGTON – President-elect Joe Biden and his advisers plan this week to demonstrate a far more assertive strategy against the coronavirus than President Donald Trump’s, and Biden may take a more proactive role in coming weeks in congressional negotiations over an economic stimulus package.

Biden’s proposals, some of which were posted on his new transition website, include aiming to secure funds for ramping up coronavirus testing, acquiring additional protective equipment such as masks and gowns, and investing $25 billion in vaccine manufacturing and distribution.

Biden’s aides, saying they recognize that the United States has one president at a time, nonetheless hope to seize on the momentum from his victory to signal decisive action on the major crises engulfing the nation. That could be complicated, however, by Trump’s refusal to concede and the fact that some states are still finalizing their vote counts.

Biden’s preparations come as some Republicans said they will continue challenging the results showing that Biden has captured the White House. GOP leaders such as Senate Majority Leader Mitch McConnell, R-Ky., have yet to publicly acknowledge Biden’s victory.

In a move that appeared designed to encourage more Republicans to accept the election’s outcome, former president George W. Bush on Sunday announced that he had called Biden, as well as Vice President-elect Kamala Harris, to congratulate them on their win.

“Though we have political differences, I know Joe Biden to be a good man, who has won his opportunity to lead and unify our country,” Bush said in a statement. “I offered him the same thing I offered Presidents Trump and Obama: my prayers for his success, and my pledge to help in any way I can.”

While he said that Trump has a right to pursue any legal challenges, Bush made clear that in his view, “the American people can have confidence that this election was fundamentally fair, its integrity will be upheld, and its outcome is clear.”

Biden made a handful of calls Sunday, according to advisers, but he spent much of the day relaxing with his family. He attended a church service at his local parish, walking through the cemetery where his son Beau, who died in 2015 of brain cancer, is buried, but made no public appearances.

At the same time, his team’s plans for a new administration were moving ahead aggressively. For months, a group of advisers has been running a nascent transition effort, meeting with Trump administration officials and preparing lists of potential staffers. Biden himself, however, has in general not been engaged directly in that process.

“He’s been focused like a laser on the campaign,” said one adviser involved in the transition, speaking on the condition of anonymity to discuss planning efforts. “But it’s going to be a very difficult transition, and we’ll be ready for it.”

The adviser also said that the Biden team is still savoring their candidate becoming president after decades of trying. “We’re enjoying the moment. It’s been years and years and years,” the adviser added. “Next week, and the week after, we’ll be focused on what’s next.”

Still, Biden’s aides said the president-elect recognizes the need to signal to the public that he plans fast action to help a country staggering under a pandemic and an economic free-fall.

Biden is planning to announce a task force on the coronavirus on Monday, led by two advisers who have been consulting with him for months and have helped devise the science-based approach he highlighted during his campaign. His transition team, which unveiled a website and social media accounts Sunday, plans to begin making personnel decisions this week.

Aides do not expect to announce any Cabinet nominations for several weeks, according to an aide familiar with the planning who spoke on the condition of anonymity because they were not authorized to share internal deliberations. Top White House positions, which don’t require confirmation, are typically announced first and Biden’s team expects to follow that model, the aide said.

Some top jobs – including Biden’s pick for White House chief of staff – will probably be made public this week, potentially providing insight into how Biden intends to govern.

Many inside the campaign believe Ronald Klain, a longtime Biden aide who served as chief of staff in the early years of his vice presidency, is a likely choice for White House chief of staff. Other prospects include top adviser Steve Ricchetti, who served as Biden’s chief of staff during President Barack Obama’s second term, and Rep. Cedric Richmond, D-La., a co-chairman of the Biden campaign.

The jockeying for influence and top positions has been underway for weeks, with widespread speculation over various roles and positions. Since Biden was declared the winner Saturday morning, the work has mingled with celebration.

Top aides celebrated at the Wilmington Westin’s restaurant, the River Rock Kitchen, until late Saturday evening. Many wore new black face masks with “46” written on the side, in homage to Biden soon becoming the 46th president.

Friends of Biden’s from across the political spectrum said they expected a more traditional government than the chaos-favoring Trump had assembled.

“I think first of all, his Cabinet will be damn competent. Joe understands the issues, he understands government,” former defense secretary Chuck Hagel said Sunday.

Biden officials are prepared for legal action if that administrator – Emily Murphy, a Trump political appointee – delays that decision, according to officials familiar with the matter.

Trump has so far not conceded defeat, continuing to falsely claim that he won the election, and as of Sunday afternoon the GSA had not yet signed the letter needed to start that process, the Biden transition aide said.

Biden allies are hoping the election sets the stage for the president-elect to take on more of a public role, starting this week, in educating Americans about the severity of the virus, after many months of Trump playing down the dangers.

While Biden’s transition will focus heavily on the coronavirus response, it is also aimed at launching some of his other priorities. The Washington Post reported Saturday night that he was planning a series of executive orders, but his team is also aiming to line up some legislative efforts.

Sen. Mitt Romney, R-Utah, the 2012 Republican presidential nominee, said he had not yet spoken with Biden. But he was one of the only elected Republicans to say that he looks forward to trying to work with the incoming Democratic president.

“Can we find common ground? Yes,” Romney told CNN. “And if Joe Biden works with Republicans in the Senate, he’s going to find that we will be able to find common ground. After all, he’s been there a long time himself. He knows what it takes to get things done in that chamber.”

Beyond resistant Republicans, Biden is likely to face challenges from a fractious Democratic Party. While he was able to unite the party behind the goal of defeating Trump, Democrats are frustrated, and in some cases angry, that their House majority was reduced and that they have not secured a Senate majority.

Control of the Senate is likely to come down to two runoff elections in Georgia that will be decided Jan. 5. Democrats would need to win both races to effectively have control of the Senate, with Harris serving as the tie-breaking vote.

On Sunday, Sen. Elizabeth Warren, D-Mass., a former presidential candidate who drew the support of many liberal voters, suggested it would be a mistake for Biden and other Democrats to reach out to Republicans as they shape their agenda.

“What happens next matters. In the past, efforts to build ‘unity’ and ‘consensus’ in Washington have too often meant turning over the keys to giant corporations and their lobbyists,” Warren tweeted Sunday afternoon. “We can’t let that happen again.”

A leader of the Black Lives Matter movement sent a letter to Biden and Harris urging them to pursue a “well-thought out, community-driven, fully resourced agenda that addresses the particular challenges faced by Black people.”

In the letter, Black Lives Matter co-founder Patrisse Cullors requested a meeting with the president-elect and vice president-elect to “discuss the expectations that we have for your administration and the commitments that must be made to Black people.” She added, “We want something for our vote. We want to be heard and our agenda to be prioritized.”

But several Republicans on Sunday said that the race still needs to go through any recounts and legal challenges before Biden is declared the winner.

“Every legal challenge should be heard,” House Minority Leader Kevin McCarthy, R-Calif., said on Fox News’s “Sunday Morning Futures.” “Then, and only then, [will] America decide who won the race.”

Former governor Chris Christie of New Jersey, a top Trump ally, had a blunt warning for his fellow Republicans, however. “If your basis for not conceding is that there was voter fraud, then show us. Show us,” he said on ABC’s “This Week.” “Because if you can’t show us, we can’t do this. We can’t back you blindly without evidence.”

Sen. Roy Blunt, R-Mo., said on the same program that it “seems unlikely” that vote projections showing Biden as the winner would change, but that it was understandable for Republicans to wait a little longer for state election officials to certify the outcome.

“It’s time for the president’s lawyers to present the facts,” Blunt said.

Blunt, who chairs a bipartisan congressional committee that plans the presidential inaugurations, said some decisions have yet to be made, but at the moment he expects a traditional ceremony.

“We’re moving forward, anticipating an outside, full-scale inauguration that’s easier to scale back than to scale up,” he said. “We’re going to be talking to people this week about that very topic.”

“We’re going to project to the world that democracy works,” Blunt added. “I expect to see both vice president Biden and President Trump on the stage on Inaugural Day. And that will be a powerful message, no matter which one of them is sworn in that day.”

Biden moves fast on virus and economy added by Tribune on November 8, 2020
View all posts by Tribune →