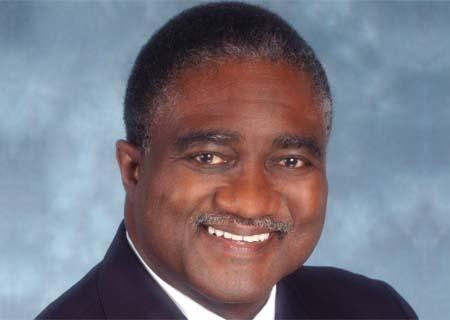 (TriceEdneyWire) – Pioneering Civil rights and Black political journalist George E. Curry, the reputed dean of Black press columnists because of his riveting weekly commentary in Black newspapers across the country, died suddenly of heart failure on Saturday, August 20. He was 69.

Rumors of his death circulated heavily in journalistic circles on Saturday night until it was confirmed by Dr. Bernard Lafayette, MLK confidant and chairman of the Southern Christian Leadership Conference shortly before midnight.

“This is a tragic loss to the movement because George Curry was a journalist who paid special attention to civil rights because he lived it and loved it,” Lafayette said through his spokesman Maynard Eaton, SCLC national communications director.

Curry’s connection to the SCLC was through his longtime childhood friend, confidant and ally in civil rights, Dr. Charles Steele, SCLC president. Lafayette said Dr. Steele was initially too distraught to make the announcement himself and was also awaiting notification of Curry’s immediate family.

Steele and Curry grew up together in Tuscaloosa, Ala. where Curry bloomed as a civil rights and sports writer as Steele grew into a politician and civil rights leader.

Curry began his journalism career at Sport Illustrated, the St. Louis Post Dispatch, and then the Chicago Tribune. But he is perhaps best known for his editorship of the former Emerge Magazine and more recently for his work as editor-in-chief for the National Newspaper Publishers Association from 2000-2007 and again from 2012 until last year.

His name is as prominent among civil rights circles as among journalists. He traveled with the Rev. Jesse Jackson and appeared weekly to do commentary on the radio show of the Rev. Al Sharpton, “Keepin’ It Real.”

When he died he was raising money to fully fund Emerge News Online, a digital version of the former paper magazine. He had also continued to distribute his weekly column to Black newspapers.

Few details of his death were readily available Sunday morning. Reactions and memorial information will be forthcoming. The following is his edited speaker’s biography as posted on the website of America’s Program Bureau:

His work at the NNPA has ranged from being inside the Supreme Court to hear oral arguments in the University of Michigan affirmative action cases to traveling to Doha, Qatar, to report on America’s war with Iraq.

As editor-in-chief of Emerge, Curry led the magazine to win more than 40 national journalism awards. He is most proud of his four-year campaign to win the release of Kemba Smith, a 22-year-old woman who was given a mandatory sentence of 24 1/2 years in prison for her minor role in a drug ring. In May 1996, Emerge published a cover story titled “Kemba’s Nightmare.” President Clinton pardoned Smith in December 2000, marking the end of her nightmare.

Curry is the author of Jake Gaither: America’s Most Famous Black Coach and editor of The Affirmative Action Debate and The Best of Emerge Magazine. He was editor of the National Urban League’s 2006 State of Black America report. His work in journalism has taken him to Egypt, England, France, Italy, China, Germany, Malaysia, Thailand, Cuba, Brazil, Ghana, Senegal, Nigeria, the Ivory Coast, Mexico, Canada, and Austria. In August 2012, he was part of the official US delegation and a presenter at the USBrazil seminar on educational equity in Brasilia, Brazil. George Curry is a member of the National Speakers Association and the International Federation for Professional Speakers.

His speeches have been televised on C-SPAN and reprinted in Vital Speeches of the Day magazine. In his presentations, he addresses such topics as diversity, current events, education, and the media. Born in Tuscaloosa, Alabama, Curry graduated from Druid High School before enrolling at Knoxville College in Tennessee. At Knoxville, he was editor of the school paper, quarterback and co-captain of the football team, a student member of the school’s board of trustees, and attended Harvard and Yale on summer history scholarships.

While working as a Washington correspondent for The Chicago Tribune, he wrote and served as chief correspondent for the widely praised television documentary Assault on Affirmative Action, which was aired as part of PBS’ Frontline series. He was featured in a segment of One Plus One, a national PBS documentary on mentoring. Curry was part of the weeklong Nightline special, America in Black and White. He has also appeared on CBS Evening News, ABC’s World News Tonight, The Today Show, 20/20, Good Morning America, CNN, C-SPAN, BET, Fox Network News, MSNBC, and ESPN. After delivering the 1999 commencement address at Kentucky State University, he was awarded a Doctor of Humane Letters.

In May 2000, Lane College in Jackson, Tennessee, also presented Curry with an honorary doctorate after his commencement speech. Later that year, the University of Missouri presented Curry with its Missouri Honor Medal for Distinguished Service in Journalism, the same honor it had earlier bestowed on such luminaries as Joseph Pulitzer, Walter Cronkite, John H. Johnson, and Winston Churchill. In 2003, the National Association of Black Journalists named Curry Journalist of the Year.

Curry became the founding director of the St. Louis Minority Journalism Workshop in 1977. Seven years later, he became founding director of the Washington Association of Black Journalists’ annual high school journalism workshop. In February 1990, Curry organized a similar workshop in New York City. While serving as editor of Emerge, Curry was elected president of the American Society of Magazine Editors, the first African American to hold the association’s top office.

Curry is chairman of the board of directors of Young DC, a regional teen-produced newspaper; immediate past chairman of the Knoxville College board of trustees; and serves on the board of directors of the Kemba N. Smith Foundation and St. Paul Saturdays, a leadership training program for young African American males in St. Louis. Curry was also a trustee of the National Press Foundation, chairing a committee that funded more than 15 workshops modeled after the one he directed in St. Louis.